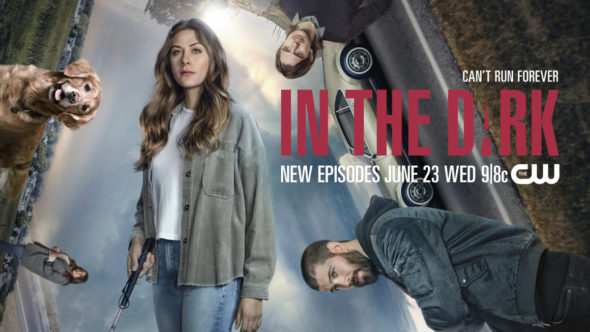 There’s no need to worry about In the Dark being cancelled this time around. The CW has already renewed the show for a fourth season. Will that be the end or, will it continue? Stay tuned.  *Status update below.

A crime drama, the In the Dark TV show stars Perry Mattfeld, Brooke Markham, Casey Deidrick, Keston John, Morgan Krantz, Theodore Bhat, and Matt Murray. In the series, Murphy (Mattfeld) is a messy twenty-something who struggles on a daily basis to balance her random hookups, her hangovers, and her drug front. She’s also blind. In season three, Murphy and her best friend, Jess (Markham), along with their annoying friend Felix (Krantz), and Murphy’s ex-boyfriend, Max (Deidrick), find themselves faced with yet another dilemma – how to avoid getting caught for murder.

10/7 update: You can see the latest night’s ratings in context.

What do you think? Do you like the In the Dark TV series on The CW? Are you glad that it’s been renewed for a fourth season?

*5/13/22 Status Update: In the Dark has been cancelled by The CW and will end with season four.

With season 3, this series has turned into Sex and the Blind Girl. It was always one of Murphy Mason’s escapisms, but it’s now become gratuitous. It dwells as an undercurrent in every episode. Everyone is banging each other at some point in the plots. And it has blemished the series. So much hope for an intriguing character flushed down the drain of excess and unwarranted titillation.

Hobbes1234
I agree with “mazz” in that there is too much sex. The actors are superb without the sex . The sex just trashes the plot and “it blemishes
the series”. It detracts from Murphy’s
brilliant personality. And it detracts from
Felixes brilliant personality. The plot is “flushed down the drain of excess and unwarranted titillation”. This is my favorite series so I am hopeful for a Season 4.

I have to agree with you! What happened to season 3? It’s as if they changed writers; I hate when this happens. Season 1 and 2 were well-written and one could suspend a little disbelief that a blind girl could navigate out of so many harrowing situations, but season 3 is downright dumb–and yes, everyone is banging everyone for no entertaining reason. The only interesting part was the dynamic with Jess and what she chose to do in the end.