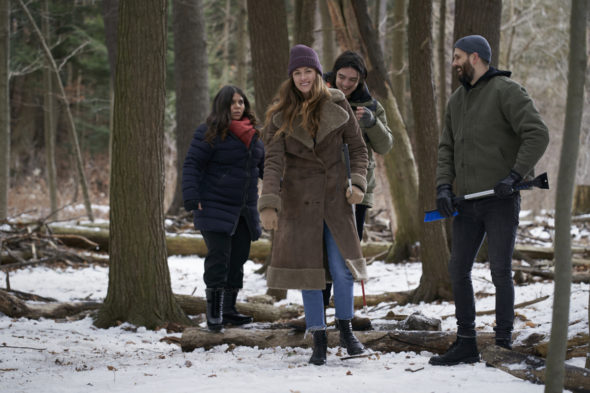 Are Murphy and her friends in over their heads in the third season of the In the Dark TV show on The CW? As we all know, the Nielsen ratings typically play a big role in determining whether a series like In the Dark is cancelled or renewed for season four. Unfortunately, most of us do not live in Nielsen households. Because many viewers feel frustrated when their viewing habits and opinions aren’t considered, we invite you to rate all of the third season episodes of In the Dark here. *Status update below.

A CW crime drama, the In the Dark TV show stars Perry Mattfeld, Brooke Markham, Casey Deidrick, Keston John, Morgan Krantz, Theodore Bhat, and Matt Murray. In the series, Murphy (Mattfeld) is a messy twenty-something who struggles on a daily basis to balance her random hookups, her hangovers, and her drug front. She’s also blind. In season three, Murphy and her best friend, Jess (Markham), along with their annoying friend Felix (Krantz), and Murphy’s ex-boyfriend, Max (Deidrick), find themselves faced with yet another dilemma – how to avoid getting caught for murder.

What do you think? Which season three episodes of the In the Dark TV series do you rate as wonderful, terrible, or somewhere between? Are you glad that In the Dark has been renewed for a fourth season on The CW? Don’t forget to vote, and share your thoughts, below.

*5/13/22 Status Update: In the Dark has been cancelled by The CW and will end with season four.

After the last episode of Season 3, it seems that even if Jess never admits to shooting Nia, clearing Murphy of murder, the video showing Felix tied up and Nia taking a gun into the other room (to kill Murphy) would, at minimum, make a great basis for a self defense plea for Murphy!

Season 3 is far too slow. Every episode seems to be dragged out just to fill time. Too bad because the first two seasons were very good.

Looks like our wish will not come true and we won’t find out what happens to Murphy all alone without Felix. We read yesterday that In The dark is going to Netflix. Thanks for leaving US in the dark,.

The CW has renewed the In the Dark drama series for a fourth season which will air as part of the 2021-22 television season (September 2021 through August 2022).

Very good show. We are hoping for many more seasons.
Lynda and Dianne.

Its a real eye opener to see into the world of the Blind. Y ou make the show so real that it is spell bounding to watch

Please Don’t cancel In The Dark. We have been waiting a long time for season 4. Our fingers are crossed for a continuation. We Thank you in advance.
Sincerely yours,
Lynda and Dianne

I watched the first episode of season 3 & I loved it. Please don’t cancel this show it is a really great show & I will continue to watch it!!!!!!!