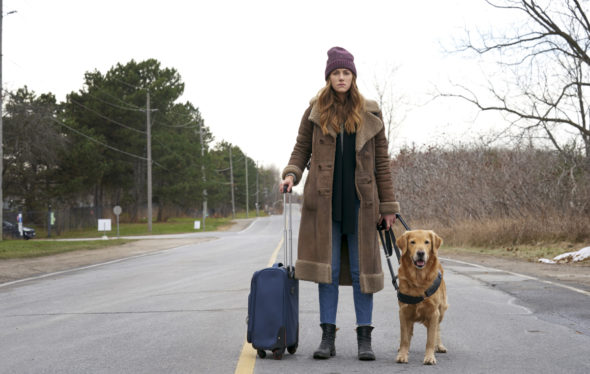 Can Murphy’s life get any more complicated? Has the In the Dark TV show been cancelled or renewed for a fourth season on The CW? The television vulture is watching all the latest cancellation and renewal news, so this page is the place to track the status of In the Dark, season four. Bookmark it, or subscribe for the latest updates. Remember, the television vulture is watching your shows. Are you?

Airing on The CW television network, the In the Dark TV show stars Perry Mattfeld, Brooke Markham, Casey Deidrick, Keston John, Morgan Krantz, Theodore Bhat, and Matt Murray. In the series, Murphy (Mattfeld) is a messy twenty-something who struggles on a daily basis to balance her random hookups, her hangovers, and her drug front. She’s also blind. In season three, Murphy and her best friend, Jess (Markham), along with their annoying friend Felix (Krantz), and Murphy’s ex-boyfriend, Max (Deidrick), find themselves faced with yet another dilemma – how to avoid getting caught for murder.

The third season of In the Dark averaged a 0.06 rating in the 18-49 demographic and 365,000 viewers in the live+same day ratings (includes all DVR playback through 3:00 AM). Compared to season two, that’s down by 21% in the demo and down by 14% in viewership. While these numbers don’t include further delayed or streaming viewing, they are a very good indicator of how a show is performing, especially when compared to others on the same channel. There can be other economic factors involved in a show’s fate, but the higher-rated series are usually renewed and the lower-rated ones are cancelled. Find out how In the Dark stacks up against other CW TV shows.

We don’t have to wonder if The CW will cancel In the Dark this time around. The drama series has already been renewed for season four. I’ll update this page with breaking developments. Subscribe for free alerts on In the Dark cancellation or renewal news.

What do you think? Do you hope that the In the Dark TV show will be renewed for a fourth season? How would you feel if The CW cancelled this TV series, instead?

Awesome series! Riveting plots and twists! So glad to find this!

I am 76 yrs. old and I discovered In The Dark on HULU. I began watching and it expired, while I was watching the 1st season. When I located it on NetFlix, I binged watched all 3 seasons. It was wirth the sleep deprivation. Hoping for season 4. I found it entertaining, and informative. A revealing look into relationships and how they are formed and sustained, whether healthy or toxic.

I love this show and so does my husband

Yes, I have watched In The Dark since the beginning & I love the show. Please don’t cancel this show, so many of the bad ones stay on TV & the good ones get canceled. I am a fan and am asking for you to not cancel this show!