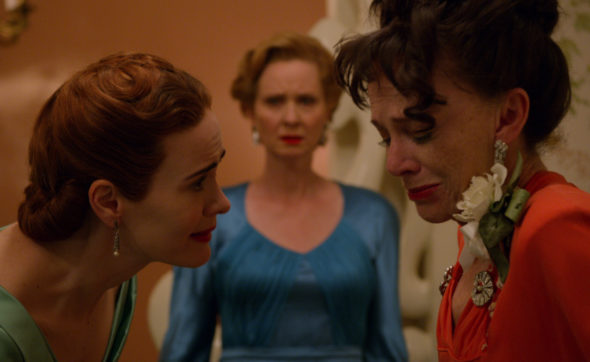 Do the stories in the first season of the Ratched TV show on Netflix drive you a little crazy? As we all know, the Nielsen ratings typically play a big role in determining whether a TV show like Ratched is cancelled or renewed for season two. Netflix and other streaming platforms, however, collect their own data. If you’ve been watching this TV series, we’d love to know how you feel about the first season episodes of Ratched here.

A Netflix suspense drama series from Ryan Murphy and Ian Brennan, the Ratched TV show is based on the character of Nurse Ratched from the One Flew Over The Cuckoo’s Nest novel. It stars Sarah Paulson, Cynthia Nixon, Judy Davis, Sharon Stone, Jon Jon Briones, Finn Wittrock, Charlie Carver, Alice Englert, Amanda Plummer, Corey Stoll, Sophie Okonedo, and Vincent D’Onofrio. The series was created by Evan Romansky and tells the origin story of asylum nurse Mildred Ratched (Paulson). In 1947, Mildred arrives in Northern California to seek employment at a leading psychiatric hospital where new and unsettling experiments have begun on the human mind. On a clandestine mission, Mildred presents herself as the perfect image of what a dedicated nurse should be. The wheels are always turning as she begins to infiltrate the mental health care system and those within it. Mildred’s stylish exterior belies a growing darkness that has long been smoldering within, revealing that true monsters are made, not born.

What do you think? Which season one episodes of the Ratched TV series do you rate as wonderful, terrible, or somewhere between? Do you think that Ratched on Netflix should be cancelled or renewed for a second season? Don’t forget to vote, and share your thoughts, below.