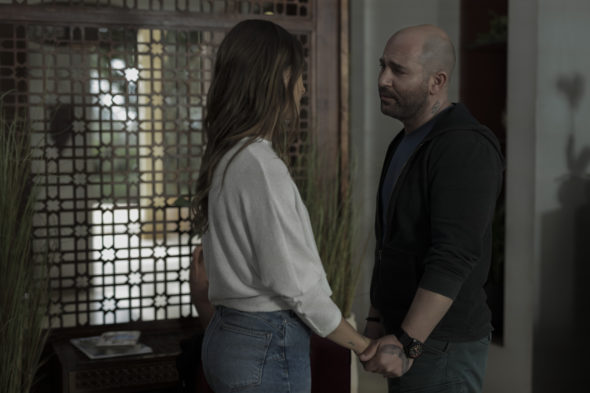 What twists and turns will Segev encounter in the first season of the Hit & Run TV show on Netflix? As we all know, the Nielsen ratings typically play a big role in determining whether a TV show like Hit & Run is cancelled or renewed for season two. Netflix and other streaming platforms, however, collect their own data. If you’ve been watching this TV series, we’d love to know how you feel about the first season episodes of Hit & Run here. *Status Update Below.

A Netflix action thriller series, the Hit & Run TV show stars Lior Raz, Sanaa Lathan, Kaelen Ohm, Moran Rosenblatt, Gregg Henry, and Gal Toren. The story follows Segev Azulai (Raz), a regular-guy Tel Aviv tour guide who’s married to Danielle (Ohm), a dancer from America. As she’s about to depart for a big audition in New York City, Danielle is tragically killed in a hit-and-run. Grief-stricken and confused, Segev is left trying to make sense of her death and follows his wife’s killers to the United States. Was it truly an accident? What if Segev is more than just a tour guide? He’s aided in his quest by his friend Ron (Toren) and Naomi (Lathan), his former lover who’s now a journalist. With multiple twists and turns, Segev’s search uncovers disturbing truths about his beloved wife and the secrets that she kept from him.

What do you think? Which season one episodes of the Hit & Run TV series do you rate as wonderful, terrible, or somewhere between? Do you think that Hit & Run on Netflix should be cancelled or renewed for a second season? Don’t forget to vote, and share your thoughts, below.