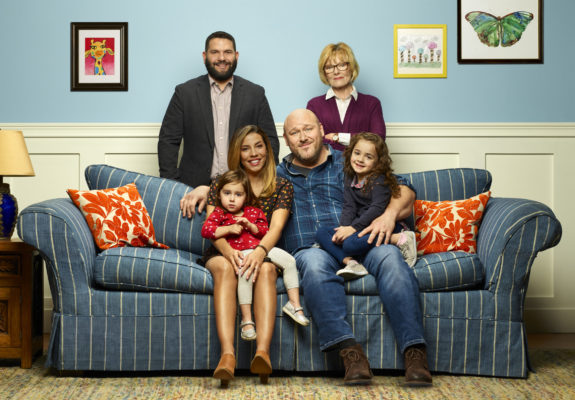 TV show description:
A family situation comedy, the United We Fall TV show revolves around the trials and tribulations of Bill (Sasso) and Jo (Mitchell) as they try to make it day-to-day as a functioning family. They’re the parents of two young kids, Emily (Helton) and Lulu (Carjaval).

They stand united against everyone — other parents, teachers, doctors, specialists, coaches, co-workers, and especially their kids. Each episode shows that when two people with young children and overzealous extended families truly love each other, barely anything is possible.

Series Finale:
Episode #8 — Re-Wedding Crashers
On their 10-year anniversary, Bill and Jo decide to renew their vows, but their overzealous extended family and an approaching snowstorm threaten to ruin the event.
First aired: August 26, 2020.

What do you think? Do you like the United We Fall TV show? Do you think it should have been cancelled or renewed for a second season?

Reading here they canceled it. Sad to hear. It was a lot funnier than crap like Blackish.

I think it’s really funny so they should renew it.

Great show. Funny. Leave it on, this is a funny show

I really enjoyed this new show , Will Sasso is funny, he and Christina Vidal have good on screen chemistry. Jane Curtin is perfect as his mother. My only complaint is jo’s brother Chuy, I get that his character thinks he better than everyone else but I Just don’t care for him. I do love this show, I looked forward to watching it each week, I hope ABC renews it.

We like it! Have laughed out loud, and it seems to have gotten better since it started.

Love, love , love it! They feel like a real family. They are not your Ozzie and Harriet family. I watched them up to present and laughed. Keep them on…. it’s what we need with all the crap going on.

I have watched the show twice now and enjoy it! My concern for Christina Vidal-Mitchell who plays Jo. I’m concerned looking at her throat that she may have a Thyroid Disease and may want to see an Endocrinologist. I had a Thyroid problem in my 30’s and have a habit of noticing abnormalities. Please forward this to her.

Have not watched it yet

This show is awful. Jane Curtain couldn’t be more irritating if she tried. Cancel

Enjoyed the show. very funny. Nice to have a new light comedy for the summer!

I don’t know how this could be any worse… Never even got to the second episode. And that canned laughter…. ugh! I can sum it up in one word CANCEL.

We only saw two episodes and we like it. It’s funny which we all need right now. Networks have to give new programs some time to catch on. I’ve list a lot of programs that I thought were great.