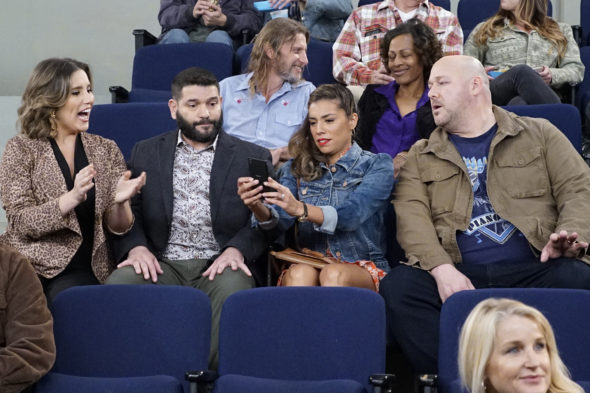 Is this a family you want to invite into your home? Has the United We Fall TV show been cancelled or renewed for a second season on ABC? The television vulture is watching all the latest cancellation and renewal news, so this page is the place to track the status of United We Fall, season two. Bookmark it, or subscribe for the latest updates. Remember, the television vulture is watching your shows. Are you?

The first season of United We Fall averaged a 0.51 rating in the 18-49 demographic and 3.43 million viewers. Find out how United We Fall stacks up against other ABC TV shows.

Will ABC cancel or renew United We Fall for season two? The alphabet network held this sitcom until mid-summer which seems to be an indication that they don’t have much faith in it. The series did okay the ratings so, there’s a chance it will be renewed.  I’ll update this page with breaking developments. Subscribe for free alerts on United We Fall cancellation or renewal news.

What do you think? Were you hoping the United We Fall TV show would be renewed for a second season? How do you feel if ABC cancelled this TV series, instead?

This was the funniest show ever. So sad it won’t be back

My family and I enjoy the program. Fun loving
Program. Please DO NOT CANCEL.
Not to many programs you can watch with your family.

Please don’t cancel this show. We love it. We looked forward to it every week.

I hope the show returns funny and I like the characters.Keep this show

Wife and I thought it got better as it went along. We would like to see a second chance next year.

really BAD show not worth watching. Not funny and offensive!!!! CANCEL it.

I actually liked it, Jane Curtain is hilarious!

Cancel it! I’m shocked that the mother called her 2- year old a *****. So inappropriate and I’m glad my family was not watching this show with me. Cancel it and never bring it back.