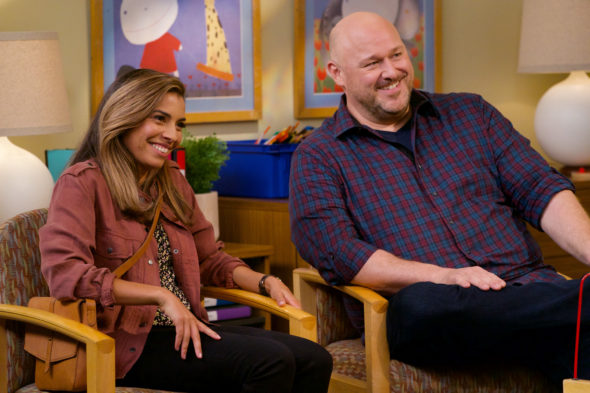 ABC announced they’d ordered the United We Fall comedy series back in May 2019 but didn’t get around to airing it until more than a year later. That doesn’t seem to indicate a lot of faith in the series. Will strong ratings save this sitcom? Will United We Fall be cancelled or renewed for season two? Stay tuned. Status Update Below.

A family situation comedy, the United We Fall TV show stars Will Sasso, Christina Vidal Mitchell, Jane Curtin, Guillermo Diaz, Ella Grace Helton, and Ireland and Sedona Carjaval. The series revolves around the trials and tribulations of Bill (Sasso) and Jo (Mitchell) as they try to make it day-to-day as a functioning family. They’re the parents of two young kids, Emily (Helton) and Lulu (Carjaval). Bill’s very judgmental live-in-mother, Sandy (Curtin), and Jo’s large Latinx Catholic family — including brother Chuy (Diaz) — never hesitate to let this couple know they’re seemingly screwing up, but Bill and Jo will always have each other’s backs.

8/27 update: You can see the latest night’s ratings in context.

What do you think? Do you like the United We Fall TV series on ABC? Should it be cancelled or renewed for a second season?

I thought this show was funny and pretty much showed how some lives are hectic. They had it on at a bad part of the year with Covid. I think it deserves another season at least.

The laugh track is ruining this show, which is mildly amusing. There isn’t too much to watch these days, so I put it on mute and read the closed captioning. Try it that way. It’s a lot better with no noise.

The pilot was boring, then the second episode was funny. Then the third episode went back to boring. I haven’t watched it since. I would love to see Will Sasso return to MOM as Jill’s boyfriend. Jane Curtin is a great comic actor but this show isn’t a good fit for her. I’ve never heard of the actor who plays the mom on this show. Or the kids. Nothing to write home about. It could go from okay to great if the writing was better.

I love watching United We Fall. Please renew the show for a 2nd season. Love the cast. I give the show a 5 star rating.

I’ve watched three episodes so far but I think that’s all I can take. It’s just not funny or realistic. The oldest child is cute but a little too much. Jane Curtin’s character is too weird. It’s hard to judge the acting talents though when the scripts are so weak.

I actually don’t mind it I think it’s cute, not a bad show to watch while waiting for new shows to come out and yes the acting is a little off but like I said not bad for the timing

It’s horrible. The acting is out of place and scripted. The over reaction to parenting isn’t funny. And finally, the Einstein 5 year old doesn’t fit the narrative.

I lasted about 3 minutes into the pilot. Couldn’t abide the laugh track.
It’s a shame, really. I like Will Sasso’s work on “Mom”, and the writing here didn’t seem to be too awful (what little I saw of it) but including a laugh track is basically saying “We know this product isn’t that funny, so we’re going to laugh for you. You’re welcome.