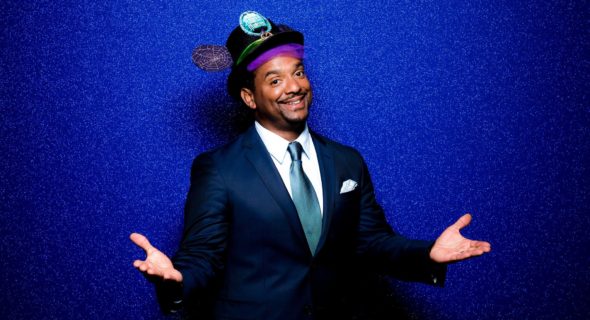 An ABC comedy competition series, America’s Funniest Home Videos is the network‘s longest-running primetime entertainment show and is currently hosted by Alfonso Ribeiro. Regular people submit amateur videos featuring their boo-boos and blunders to the competition, in hopes the studio audience will award them cash and other prizes. Previous hosts have included Tom Bergeron, D.L. Hughley, and Richard Kind, John Fugelsang and Daisy Fuentes, and the original host, Bob Saget.

*5/14/21 update: America’s Funniest Home Videos has been renewed for a 32nd season on ABC.

AFV was the brightest spot in my week when I was having some very serious issues with depression. As sad or pathetic as it may sound, it seemed to be the only time I would laugh the entire week!
I would imagine I’m not the only one that thinks this, with the amount of depression going on these days I do think AFV is more important to people than some may really think. I do hope AFV continues for years to come!
Thank you!

I have always loved AFV but I really miss Tom Bergeron. He was a fabulous host. So funny. .He was the best.

Alberto NOT so much. His suits are way too small & way too tight. He is just disgusting and not at all funny!!

I don’t watch the show, no interest

great to have this show back, we need a good laugh ,now more than ever, and this show is fantastic in that respect, hope it continues another 10 years at least

I still believe that ABC will renewal this show because the fan still loves the show.

The show’s contents/videos are great. ~Less gruesome falls(I fast forward through them or turn it off)No need for that…especially on a Sunday Programme. You have shown hundreds of hrs of Funny Falls, but LEAVE THE FACE PLANTS OUT PLEASE. ~Love, love, love the Animals&Babies the most. Seniors as well. ***I wish you would hire someone like Tom Bergeron…PLEASE! As long as long as Alberto is on…not interested in watching. He is NOT FUNNY, tries too hard to be funny & his… sort of immaturity stands out.*** Thank-you for offering this platform to give opinions on American Funniest Videos. Now we’ll… Read more »