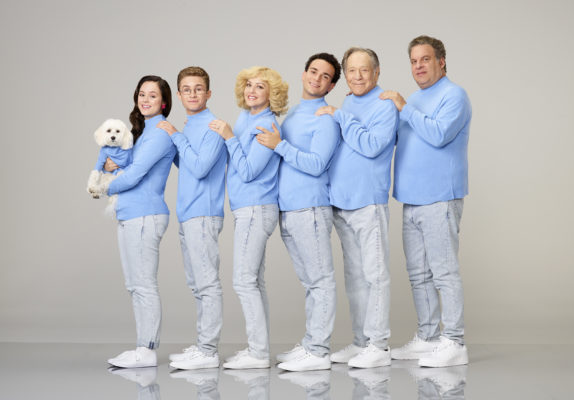 Are legwarmers a thing of the past? Is The Goldbergs TV show cancelled or renewed for a sixth season on ABC? The television vulture is watching all the latest cancellation and renewal news, so this page is the place to track the status of The Goldbergs, season five. Bookmark it, or subscribe for the latest updates. Remember, the television vulture is watching your shows. Are you?

Airing on the ABC television network, The Goldbergs stars Hayley Orrantia, Troy Gentile, Sean Giambrone, Wendi McLendon-Covey, Sam Lerner, Patton Oswalt (narrator), and AJ Michalka, with George Segal and Jeff Garlin. The 1980s period comedy centers on a family from Jenkintown, Pennsylvania. Youngest son Adam (Giambrone) videotapes his family’s craziness and provides commentary as an adult (Oswalt). In season five, the siblings will struggle with huggies, snuggies and nubbies, as they learn what it means to grow up as a Goldberg.

The fifth season of The Goldbergs averaged a 1.45 rating in the 18-49 demographic and 5.59 million viewers. Compared to season four, that’s down by 16% and down by 8%, respectively. Find out how The Goldbergs stacks up against other ABC TV shows.

Since ABC has already renewed The Goldbergs through season six, fans should sit back and enjoy the fifth season. Meanwhile, I guess I will order some takeout. Still, even renewals can be cancelled, so I’ll keep an eye on the Nielsens and update this page with breaking developments. Subscribe for free updates on any cancellation or renewal news about The Goldbergs.


What do you think? Are you glad that The Goldbergs TV show is renewed through season six? How would you feel if ABC had cancelled this TV series, instead?

I’m so happy they came back out with the 6th season of Goldberg’s! I would have been so mad if it was cancelled. I grew up in the 80’s ,so I can relate to alot of the show . Thank you for continuing make this fantastic show.

Don’t ever cancel this show! This is truly the best show ever! Me and my family love love this show, the funny part is a lot of family’s can relate to them, and I feel as though it can bring people together.

We love this show so much- please bring it back!! Love each of the characters!! It brings back everything in the 80’s- the music, the fads- the writing is AWSOME! So so funny!

Don’t cancel! I love this show

PLEASE don’t cancel the Goldbergs!! One of the best comedy family shows on tv!!!

Fantastic program. Just like life should be, lots of love, love, love.