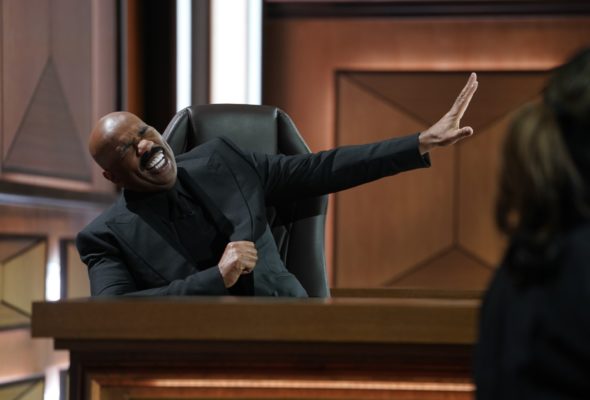 An ABC comedy court reality series, the Judge Steve Harvey TV show stars stand-up comedian and television show host Steve Harvey. On the show, Harvey serves as both the judge and the jury but, unlike other TV judges, Harvey has never held any judgeship or legal licenses. With the help of Nancy Price, his trusted bailiff by trade, Harvey plays by his own rules, basing his courtroom decisions on his own life experiences and some good old common sense. Real-life people with real-life conflicts present their case in Harvey’s TV courtroom and they range from family disputes, unpaid bets, sour friendships, and everything in between.

Our whole family love Judge Harvy! We look forward to the new episodes every week! Fun, humorous and great for the whole family! Including my grandson! Please renew for season 2!! Thanks

This is ridiculous! Steve must be getting greedy ….watched 2 minutes, no more, ever

Steve harvey could be a genius he’s always so funny but he’s given his best judgement on his new show . I wish that I could meet him and marjorie I love both of them

The show was funny and his court decisions were on point .

I love this show. Steve Harvey is so funny. I laughed the whole hour. Great entertainment!

I laughed for the whole hour. Loved this show.

I LOVE it! I’ve always respected Harvey’s advice to his tv audience when he had his show. Always thoughtful, fair and of course funny. Please, let us see more.