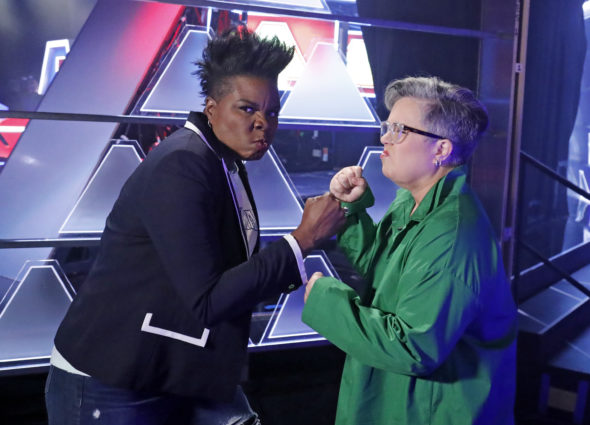 Is this a win or a loss for fans? Has The $100,000 Pyramid TV show been cancelled or renewed for a fifth season on ABC? The television vulture is watching all the latest cancellation and renewal news, so this page is the place to track the status of The $100,000 Pyramid, season five. Bookmark it, or subscribe for the latest updates. Remember, the television vulture is watching your shows. Are you?

Will ABC cancel or renew The $100,000 Pyramid for season five? This game show revival has done very well for the network so, I think it will be renewed. I’ll update this page with breaking developments. Subscribe for free alerts on The $100,000 Pyramid cancellation or renewal news.

What do you think? Are you glad that The $100,000 Pyramid TV show has been renewed for a fifth season? How would you feel if ABC had cancelled this TV series, instead?

It’s a disgusting remake. Vulgar language. Ridiculous disrespectful celebrities, some who can’t play the game and make stupid jokes to get “laughs”. Strahan is a terrible host. They ruined the best game show of all time. Embarrassing.

Looking forward to this game show to be back on. It is a fun, clean show.

I LOVE THE PYRAMID!!
I was actually a contestant on the show in the seventies when Dick Clark hosted.
Can’t wait for Michael S. & The Pyramid to return

So happy 100,000 is renewed fo season 5-when I didn’t see it in the summer Sunday line up to begin next week I was worried it was cancelled so I began searching the Internet- I am a huge Michael Strahan fan and sorry his talk show has been on hiatus due to pandemic- the 3-some adding Keke made the show take off-as the 3 play so well of one another- hope it too can return- Michael has been holding the fort down on GMA real well- look forward to new dates on Pyramid. Thankful for its fun and return of… Read more »

It is about time that there is something on TV that is worth watching. We wish the Pyramid with Michael S. was on a weekly schedule all year. Glad they do 2 shows back to back. Wish it was 4 shows like that . Hope this show is always renewed and keep Michael as host. He is great! Love the show. 4/4/2020

Yes there is not so much shows in the summer. To tell the truth very entertaining and the 1000.00 pyramid great and celebrity family few all the best

So enjoy the show. Don’t need another kid show. Not much to watch as an adult unless you like blood and guts or mundane drippy comedy shows. Give us a break and let us think for ourselves

Please please do not cancel $100,000 Pyramid. It is my favorite show and I would sorely miss it.

The 1000.000 pyramid is one off the best game shows should be renewed