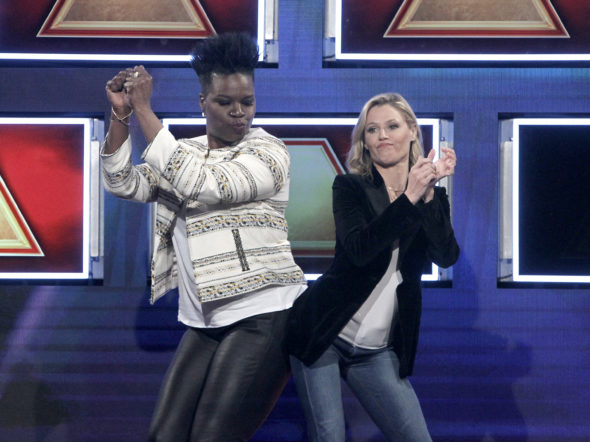 Is the third season of The $100,000 Pyramid TV show on ABC a winner or loser? As we all know, the Nielsen ratings typically play a big role in determining whether a TV show like The $100,000 Pyramid is cancelled or renewed for season four. Unfortunately, most of us do not live in Nielsen households. Because many viewers feel frustration when their viewing habits and opinions aren’t considered, we’d like to offer you the chance to rate all of The $100,000 Pyramid season three episodes. **Status update below.

What do you think? Which season three episodes of The $100,000 Pyramid TV series do you rate as wonderful, terrible, or somewhere between? Should ABC have cancelled or renewed The $100,000 Pyramid for a fourth season? Don’t forget to vote, and share your thoughts, below.

I have doubts about whether I want ABC pyramid to come back. I would almost rather it be cancelled and taken over by people who will do what is necessary to do a proper tiebreaker. I strongly disagree with those who say it is a minor change. I believe its impact is very far-reaching and significantly harms the show, making this version little better than the Osmond version. I along with many others thought the Osmond format involving 6 words in 20 seconds made the time pressure excessive and the game pace too frenetic, while other formats involving 7 words… Read more »

I have watched $100,000 Pyramid since the beginning; that means when Dick Clark was the host. I just love the show. I hope it does’nt get cancelled anytime soon.

Reflect off the glasses