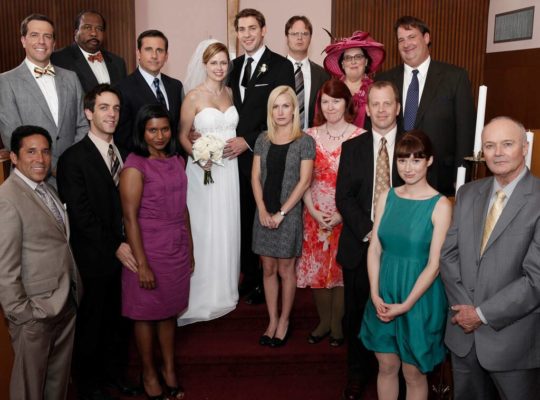 The Dunder-Mifflin crew is back together — at a distance. Recently, the cast of the NBC TV show reunited for the virtual wedding of two big fans.

Based on the UK series, the long-running comedy centered on the employees of a paper company in Pennsylvania. The cast includes Steve Carell, John Krasinski, Jenna Fischer, Rainn Wilson, Ed Helms, Angela Kinsey, Brian Baumgartner, Mindy Kaling, BJ Novak, and Creed Bratton. The show ran on NBC from 2005 to 2013.

During a recent installment of John Krasinski’s YouTube show, Some Good News, the cast of The Office reunited to celebrate the wedding of Maryland couple John and Susan. The two are big fans of the NBC comedy and John proposed to Susan just like Jim proposed to Pam in the show. You can see the cast reunion below:

What do you think? Are you a big fan of The Office? Would you watch a revival series?