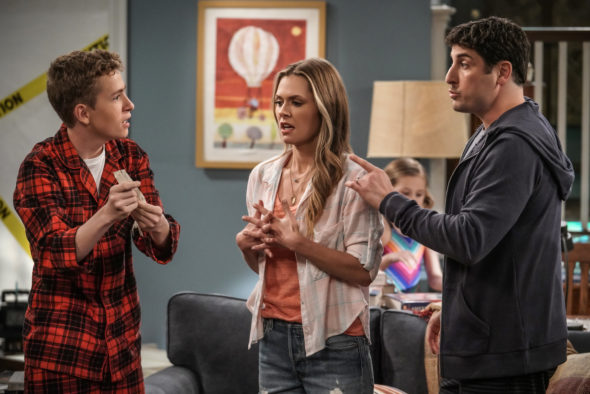 Can the parents outsmart the kids? Has the Outmatched TV show been cancelled or renewed for a second season on FOX? The television vulture is watching all the latest cancellation and renewal news, so this page is the place to track the status of Outmatched, season two. Bookmark it, or subscribe for the latest updates. Remember, the television vulture is watching your shows. Are you?

Airing on the FOX television network, Outmatched stars Jason Biggs, Maggie Lawson, Connor Kalopsis, Ashley Boettcher, Jack Stanton, Oakley Bull, Tisha Campbell, and Finesse Mitchell. The series revolves around a blue-collar couple as they try to raise their four kids in Atlantic City. Parents Kay (Lawson) and Mike (Biggs) barely made it through high school and now, they find themselves parenting four kids, three of whom are certified geniuses. Eldest son Brian (Kalopsis) is a condescending and pretentious 16-year-old math whiz. Nicole (Boettcher), is a 15-year-old deceptive and fiercely competitive language prodigy. Meanwhile, 10-year-old Marc (Stanton) is a music savant. The only child who doesn’t drive her parents crazy is eight-year-old Leila (Bull). Mike and Kay’s childhood friends are Rita (Campbell) and Irwin (Mitchell) and they provide a sounding board for the couple’s daily parenting struggles.

The first season of Outmatched averages a 0.56 rating in the 18-49 demographic and 2.38  million viewers. Find out how Outmatched stacks up against other FOX TV shows.

Will FOX cancel or renew Outmatched for season two? The channel has a shortage of live-action comedies and this one seems compatible with Last Man Standing. However, the ratings are quite low so this one could go either way. I’m leaning toward a cancellation. I’ll update this page with breaking developments. Subscribe for free alerts on Outmatched cancellation or renewal news.

What do you think? Were you hoping that the Outmatched TV show would be renewed for a second season? Are you sorry that FOX cancelled this TV series, instead?

Cant believe fox is dropping the ball on this sitcom, it was the perfect scenario of role reversal between parents and their kids since freaky Friday, but you really liked and felt sorry for the parents, and could relate to them plus it was super funny and the kids played their parts beautifully, have been waiting for it to come back on after covid, and was looking forward to it !

I love the show outmatched. I hope it continues.

No recruits for Mensa on this poorly written and acted show.

Never should have cancelled The Cool Kids for this!!!

I liked it, does need better dialogue and more characters but that is what a second season is for… I’d like to see more

Hoping they will give this show a chance to grow. It really started to hit it’s pace in the last episodes; would love to see more.

Only up to episode 3; so far I’m not impressed but I’ll try to get through the remainder of the season just in case.

Outmatched is a great show you can’t go by ratings most people watch shows on demand or wit till the whole series is done binge watch it.

Yes! Give new family shows a chance. It needs much Better writing, has the acting talent.. yes to a Season 2

I love Maggie Lawson, and the Young Sheldon-ish premise is clever enough, but the laugh track and the rushed pace of the show make it hard to watch.