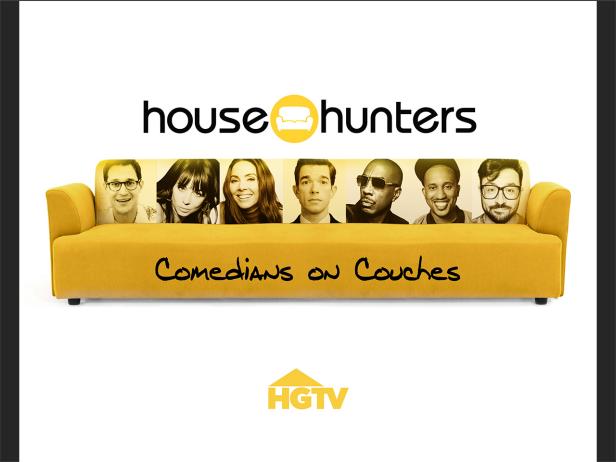 The House Hunters franchise is expanding! HGTV has ordered House Hunters: Comedians on Couches, and the series will air in a four night special event next month.

HGTV revealed more about the new House Hunters series in a press release. Check that out below.

“Fans who miss televised live events and the pithy professional commentary that comes with them can now look to HGTV to fill that void with its new, highly anticipated series House Hunters: Comedians on Couches (fka House Hunters: LOL). In a four-night, star-studded special event at 10 and 10:30 p.m. ET/PT from Tuesday, June 2, through Friday, June 5, America’s favorite contactless past time – watching and commenting on House Hunters – gets a fun new twist when seven popular comedians deliver hilarious, no holds barred, color commentary on classic episodes of the hit series. Together via videoconference, the entertainers will call out the victories and agonizing defeats caused by paint colors, granite countertops, stainless steel appliances and open concept spaces. The House Hunters: Comedians on Couches celebrity lineup is led by Dan Levy and Natasha Leggero and features their comedian friends Whitney Cummings, Eliot Glazer, John Mulaney, Chris Redd and J.B. Smoove.

“House Hunters is a pop culture phenomenon that inspires strong reactions from viewers who like to play along with its familiar house selection process,” said Jane Latman, president, HGTV. “While we may not agree with the house each family chooses or the reasons they select it, we can agree that it’s a good time to lean on talented people who can find the humor in everything and make us laugh out loud – even when it comes to the challenges and triumphs of house hunting.”

And, the comedic fun on the couch supports a good cause. While watching House Hunters: Comedians on Couches, HGTV fans are encouraged to join the fight against childhood hunger and provide meals to kids in need during COVID-19 and beyond by texting a donation to Turn Up: Fight Hunger. The partnership between Discovery, Inc., the global leader in real-life entertainment, and No Kid Hungry, is a national campaign dedicated to ending childhood hunger and will provide one billion meals for kids facing hunger in the U.S. over the next five years.”

What do you think? Will you watch this special event next month?

I hate the comedians on house hunters. Calling them comedians is very generous. They are not funny at all. I really thought this would be a funny take on the show but I was totally disappointed. If you have them on again, I will not watch.

I hate having the comedians on House Hunters. Do celebrities really need more attention?? It doesn’t fit! They are so rude and mean!!! There is nothing funny at all. All they do is bash the people trying to buy a house. Go back to how it used to be!!

I enjoy House Hunters very much but the Comedians on Couches have ruined it for me. They are mean and nasty, always making fun of the home buyers. They are very mean spirited and not at all funny. Their hateful remarks interrupt the narrative of the show. Please cancel tbe Comedians so we can get back to the great, original program, House Hunters.

Comedians on couches is very irritating . Could do without them

I love the show I laughed at all the shows, please continue with comedians on the couch with house hunters.

The worst. Wont watch again. Take it off. BTW I came to HGTV daily 5 years Go because it had nothing politics and of course the shows. I am very disappointed that you are running ads for DJT NOW. Considering leaving here for another network. Please stop the politics on this network.

Sooo bad. Not a House Hunter type show. Made for younger people to watch not enjoyable at all.