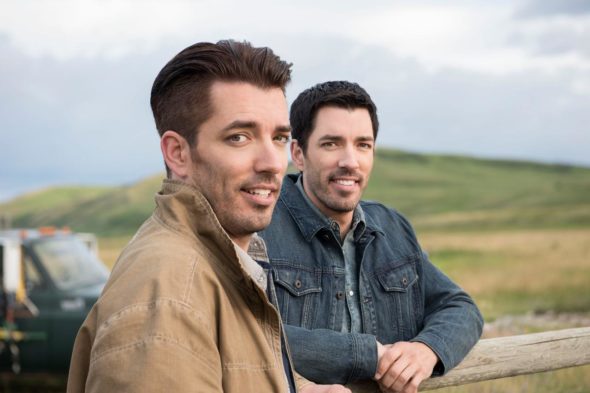 The new series will follow the Scott brothers as they renovate Drew and his fiancée Linda’s new home in Los Angeles. The five-part show will also feature Drew and Jonathan’s brother, JD, and their parents, Jim and Joanne.

New York [Oct. 16, 2017] Stars of HGTV’s Property Brothers, Jonathan and Drew Scott, will tackle their most personal project yet in preparation for Drew and fiancée Linda’s wedding in Property Brothers at Home: Drew’s Honeymoon House. Premiering on Wednesday, November 22, at 9 p.m. ET/PT, the five-episode series will follow the Scott brothers as they complete a massive renovation of the couple’s first home together in Los Angeles. In a challenging twist – the whole-home reno must be finished in a matter of weeks to host a pre-wedding party. And, since this marks Linda’s official welcome to the family, Drew and Jonathan’s parents, Jim and Joanne, and older brother JD, will be there to make this project a true Scott family affair.

The series showcases the reconfiguration of an original 1920s-era, 3,400-square-foot home in a historic LA neighborhood. In addition to the overhaul of the bedrooms, bathrooms and living area, the trio showcases their fun creativity with stunning upgrades and modern amenities, including an entire wall of custom curved-glass windows in the kitchen that let in the California sunshine. New features also include a huge third-floor deck with a hot tub and pergola; a backyard pool area with built-in fire pit and comfy seating; and a dedicated craft room for Linda.

“Since this home is nearly one hundred years old, we’ve dealt with th e same challenges that any homeowner faces when taking on a major home renovation,” said Jonathan. “But it’s been an honor to help create this family home for Drew and Linda. It’s going to be a special place.”

The twins’ older brother JD also will lend a hand throughout the series. He will help the guys with several major projects, such as a beam installation in the kitchen and building a foundation wall. He also will team up with Jonathan on a few DIY projects, including refinishing the original pocket doors.

Not to be outdone, Linda will don a tool belt, wield a hammer and work side-by-side with Drew and Jonathan during each step of the renovation. Her creative touches will be seen throughout the redesign, from reviving the Old-World charm of the original living area to finding a fun use for the retro-style pink poodle wallpaper in the bathrooms.

“We’ve shared our relationship with fans for a few years now,” said Linda. “We can’t wait to share our new home with them, too.”

Fans can visit HGTV.com/PropertyBrothers throughout the year for exclusive online content, including behind-the-scenes videos and photo galleries, and can interact on social media using #PropertyBrothers.”

What do you think? Are you a fan of the Property Brothers? Will you watch their new series?

I saw Drew and his new wife’s Linda’s style blend together. It was one unique and attractive home, especially that kitchen. I can watch Property brothers on a space station. LOL

I love the shows. All the different styles are great. And I wish Drew and Linda the best for the future!!!!

I have been a fan for a long time and watched the first episode where they take down the vintage fireplace and redo the powder room. The re-vamps are bad choices and I won’t watch this travesty again.

Anything these two young men do. I watch it. They are great. The more they personalize the better.