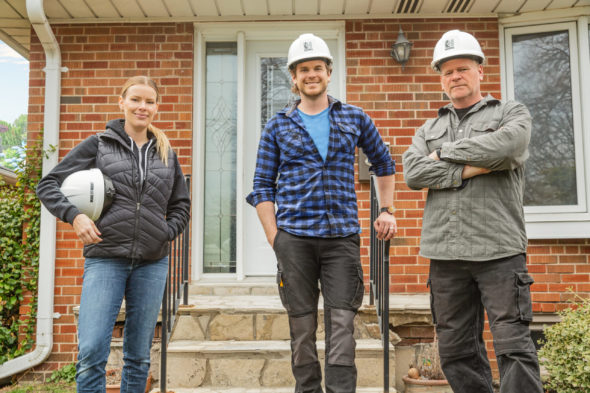 Holmes Family Rescue is coming soon to HGTV, and the cable channel has released a trailer and more details about the home renovation series. Featuring Mike Holmes and his two adult kids, Sherry and Michael Holmes Jr., the series will follow the trio as they help homeowners who had bad contractors ruin their dream homes. The family was last seen working together on Holmes Family Effect on FOX earlier this year.

HGTV revealed more about the upcoming series in a press release.

“Contractor Mike Holmes will carry on his personal mission to “make it right” for homeowners who have fallen victim to careless or dishonest contractors in the new HGTV series Holmes Family Rescue. Premiering Saturday, Dec. 4, at 8 p.m. ET/PT, the series follows Mike as he teams up with his son and daughter, home renovation experts Michael Holmes, Jr. and Sherry Holmes, to rescue more clients who are struggling with botched construction jobs. During the 12 hour-long episodes, Mike, Michael and Sherry will expose shoddy renovation work and then help their clients fix the problem.

“I’ve been saving desperate homeowners for 20 years and have witnessed the very worst in construction and renovation,” said Mike. “I’m so fortunate to have built a team with my son Michael, who can build anything, and my daughter Sherry, who is very passionate about helping people and has a great eye for design. We’re a family business that’s in the business of helping families—and that feels good.”

In the series premiere, the Holmes family will meet a couple with young kids whose contractor over-promised his skills and left them with an unlivable basement riddled with structural problems. Mike, Michael and Sherry will completely overhaul the unfinished space, providing them with a safe, cozy rec room with plenty of toy storage, home office, laundry room and modern bathroom. As the season continues, Mike and his kids will repair more construction and safety issues—including warped ceilings and floors, dangerous electrical and plumbing, and extensive water damage—for families who need them.

This December, Mike and his family will bring their festive spirit to HGTV in a one-hour special, Holmes For the Holidays, on Saturday, Dec. 18, at 8 p.m. ET/PT. Each believing their home is the best-dressed for the season, Mike, Michael and Sherry will join forces with their respective spouses to battle it out in a friendly family Christmas competition. They’ll create the most over-the-top light displays, ice sculptures and gingerbread houses—with Mike’s uncle, Billy Bell, deciding the ultimate winner. The Holmes family also will share holiday safety tips and give back to the community in meaningful ways throughout the special.”

Check out the trailer for Holmes Family Rescue season one below.

What do you think? Are you excited to see Holmes Family Rescue next month?

I met a wonderful woman (81 years young) who has been scammed so may times! How can I sign her up for a Homes and home’s renovation? Erie Pa.

Do you help when insurance companies do not follow through ?

Sure could use your help. With a combination of poor work, the death of my husband and Covid I’ve been through around 10 contractors and they left my home a hot mess.

Looking forward to this new show with Mike and family! They are the best!

Holmes family rescue. Do you ever come to Kansas? I need your help. Single older lady. Contractor moved to Boston. Lots of finishing to do. Can you help?

I always enjoy watching Mike and family fix the messed caused by others.