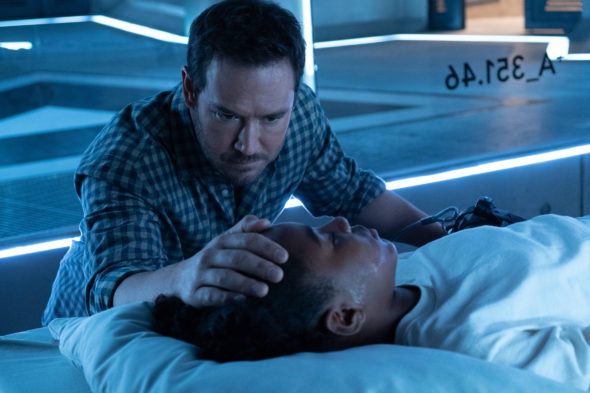 The dangers are over for Amy and Wolgast. FOX has revealed that The Passage TV show has been cancelled and won’t have a second season.

Based on the Justin Cronin book trilogy, The Passage stars Mark-Paul Gosselaar, Saniyya Sidney, Vincent Piazza, Brianne Howey, Caroline Chikezie, Jamie McShane, Emmanuelle Chriqui, McKinley Belcher III, and Henry Ian Cusick. The story centers on Project NOAH, where scientists are working on a virus that may either cure humanity of all disease or, wipe it out entirely. When Federal Agent Brad Wolgast (Gosselaar) is assigned to bring in Amy Bellafonte (Sidney) as a new test subject, he develops fatherly feelings for the child. Meanwhile, the new race of creatures locked up in Project NOAH is testing out their powers and working toward an escape.

The first season of The Passage on FOX averaged a 0.92 rating in the 18-49 demographic and 3.73 million viewers. Compared to the other FOX TV shows of the 2018-19 season, The Passage has been a middle-of-the-road performer in the ratings.

What do you think? Do you like The Passage TV show? Are you sorry that this FOX series hasn’t been renewed for a second season?

Please bring back The Passage!!! Its December of 2022 and we are still waiting for Fox to show Season two!!!! Come on guys!

0
0
Reply
Disgruntled for the last time

Don’t know if this will be read but Fox blew it by cancelling The Passage. It’s one of the reasons I no longer watch the station. You guys have done this for the last time to me. It was an excellent show.

I’m truly sick of shows popping up and going away. By the time you find out their is a new show that you’d like to watch. They are canceling it. A lot of people, including me. Don’t watch regular tv a lot. Due to the lack of any exciting shows. But we have our favorites that we do stay with. And while watching those. We see something new, and start watching it. Next thing you know, it’s done, or pickup by other stations that you have to pay to see it. Everything is $$$$$ these days. So I just don’t… Read more »

I totally agree. I watch a lot of TV and it’s still hard to keep up with coming and going shows. I realize that the networks need to make money, but viewers can’t make you money if they can’t find their favorite shows consistently.

I’m devastated surprised and shocked there’s isn’t going to be a season two, I’m on the third book and I thought the screen adaptation was amazing. Fox please please please change your mind or even better AMC please take it over. I love this show!!!

Please bring THE PASSAGE back. I loved it. I am age 66 and male

Please renew the show.. I loved the story and want to see what happens till the end.. please bring it back..☹️

I really loved watching this show!! I never believed that it would be cancelled. I was like I wonder when the passage will be back on? So I check online when the new season will premiere and find out it’s been CANCELLED!!! WTF!!!!

I am absolutely devastated The Passage was cancelled ! I honestly believed network television was turning a corner here. Turning away from the cookie cutter sitcoms and the simplistic dramadies that are inevitably set in a hospital, law office, and police stations. It was refreshing to be able to switch on the tv and see that Fox was the only network out of the 4 major networks to offer up a program which satisfies the viewers desire for a dark, edgy series that also challenges ones mind. This particular series most likely would have faired much better on Foxes cable… Read more »

That is stupid of FOX……They had to know just by reading the books that a commitment to THE PASSAGE would at least require 2 seasons for it to really get going. The 1st 10 episodes were very well done and they broke at the correct junction for the big time jump and story shift. Disappointing if this is where they stopped the show. Shows a lack of vision of the OTA Fox and why it should have been an FX or Cable show. If The Strain 3 books could be adapted to the story’s completion….THE PASSAGE (which are superior books)… Read more »

Give us a season two!

Please bring this series back!!! It was so entertaining and the characters had just started to develop. Give it another shot for the fans…

This was a hell of a show. I would love a season 2. Don’t leave us fan hanging.

I was looking forward to the second season. Seems all the good ones get canceled before they hit their stride.

I loved this show and got others to watch. Please bring it back.