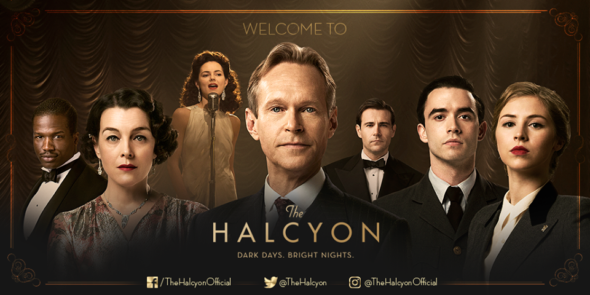 TV show description:
A British series from creator Charlotte Jones, The Halcyon TV show was cancelled by ITV in UK, prior to making its US debut on Ovation. The WWII period drama centers on a five-star London hotel, its owners, staff, and guests, in 1940s London.

Richard Garland (Mackintosh) takes great pride in his duties as The Halcyon’s Hotel Manager. While this widower is calm, cool, and collected on the outside, he will do whatever it takes to protect the hotel. Priscilla, Lady Hamilton (Williams) may be the only person in his orbit whom he cannot outwit. She is the thorn in his side.

Lawrence, Lord Hamilton (Jennings) owns this busy hotel which serves as the social hub for both city’s beautiful people, as well as newcomers brought in by the war. Although he is a philanderer at heart, he is married to Priscilla and shares two sons with her, so the staff must manage her, in order to cover for his indiscretions.

A middle-aged woman whose marriage leaves much to be desired, Priscilla is in the course of trying to come to terms with her life. Witty, prickly, and yet vulnerable, Priscilla wants the best for her children, whether at war or work. She keenly feels her lack of direction, but getting under Garland’s skin puts a spring in her step.

Although he has a dark past he longs to escape, Garland is not without his tender side. Usually it is his daughter, Emma (Corfield), who brings it out. Only a child when her mother passed away, Emma grew up at The Halcyon and now works as its receptionist. She was just coming into her own when the war broke out. Despite her desire to strike out on her own, Emma remains to see The Halcyon through the war and all the turmoil it brings.

Emma shares a connection with Lord and Lady Hamilton’s son, Freddie (Blackley). Just minutes older than his twin brother, Toby (Blumel), Freddie is the rightful heir to their father’s title and all that comes with it, with the bonus of love and approval the old man denies Toby.

Despite their respective stations, Freddie not shy about his interest in Emma. Brave at heart, he enlists in the RAF as a fighter pilot. Whether or not he is ready for war and all it encompasses remains to be seen.

For his part, Toby is bright and academically inclined. He is more at home in Oxford’s halls than amongst the aristocracy to which he was born. Despite his shy tendencies, the ethical Toby is perpetually at odds with his father, but is confident enough to take a stand when necessary. As he tries to make his own way in the world, Toby becomes critical to the war effort.

The Sonny Sullivan Band is the heart of The Halcyon’s nightlife and steamy songstress Betsey Day (Tointon) is a chief attraction, and her rough beginnings are never far from her mind. While she and Sonny (Dirisu) generate a lot of heat onstage, Betsey seems not only immune to his charms, but also ignorant to the depth of his feelings. Jaded, with a no-nonsense demeanor, Betsey is close friends with Emma.

Every grand hotel relies upon its concierge to accommodate guests, groom relationships with vendors both licit and less so, and extinguish metaphorical fires as they arise. Luckily, during this age of uncertainty — not to mention rationing — Dennis Feldman (Benton) is on the job. Friendly and reasonable, Feldman does not miss a trick and is steadfast in his loyalty to Garland. Even during the blitz, this born fixer takes care of his guests and co-workers, alike.

Finally, there’s broadcast journalist Joe O’Hara (Ryan). At the dawn of the war, O’Hara headed for London, looking to hone his skills as a foreign correspondent. While he’s always on the hunt for the next big story, he stumbles upon a juicy one — right there at “home,” at The Halcyon. That the hotel draws its share of fascists and appeasers alike does not escape Joe’s notice, much to the chagrin of the loyal staff.

Joe is naturally attracted to Emma, her enthusiasm, playfulness, and spunk. He doesn’t let his ambitions prevent him from making a play for her, regardless of Freddie’s place in her life. Ultimately, the war will shape Joe in ways he never anticipated when he first crossed The Halcyon’s threshold.

At The Halcyon, love, hate, friendships, rivalries, politics, and relationships bloom and change as the Second World War makes its mark on Londoners and London, herself.

Series Finale:
Episode #8
Toby works late into the night, looking stressed and miserable. His eyes scan the figures he’s working on the page: what’s he looking for? His pall descends further as he enters the hotel, only to bump straight into Lucian. The latter is his usual charming self, but there’s an edge of steel underneath as he maintains that he needs Toby needs to work harder.

Meanwhile an unwelcome visitor arrives at the hotel: and Garland is panicked.
The hotel prepares for 50th anniversary celebrations: Lady Hamilton’s getting into the spirit, but she can’t help Toby’s anxiety. He attempts to talk to her about Lucian, but is interrupted by the man himself: there seems to be no escape.

Happy news for Max as Garland summons him and informs him that he’s letting him off work early, something he’d never be so lenient over, were it not for a very special occasion.
Adil attempts to corner Toby and bring him back from the edge of doing something terrible, but Toby’s raging. It’s looking more and more unlikely that they’ll ever reconnect – or that Toby will find anywhere to turn. His last hope lies in Garland, who snaps into actions.

Emma’s still confused about the men in her life – she and Betsey talk about love in war. The tension between Joe and Freddie is palpable: will it spill over? And loved up Lady Hamilton is none too pleased to hear about Garland’s objections to Lucian: she puts up a steely face but it’s hit a nerve: when she makes investigations of her own, things get serious, very quickly.

Meanwhile, sparks fly downstairs, as the 50th anniversary celebrations kick into life. Betsey and Sonny, blissfully in love, start the band off loud – enough to nearly drown out the sirens that start to blare overhead. As Garland frantically staves off unwanted attention from the police at the hotel and Emma is pushed to make a final decision, it becomes clear that it’s not a drill. (Courtesy of ITV.)
First aired: November 20, 2017 (on Ovation)

What do you think? Did you like The Halcyon TV series? Was it cancelled too soon? Should it have been renewed for season two on Ovation and ITV?

I miss this show!

This is a fantastic show!! Excellent story lines, costumes and music. PLEASE BRING IT BACK!!!

I thought the show was great, why on earth cancel it, Great cast , great story line , Liked everything about it,

My wife and I both really liked the series and it had very interesting story lines and very good acting.

Did any of you guys write a letter to Left Bank Pictures asking them to find another network to pick The Halcyon up for a second season? Such as BBC One, Netflix, Amazon Video or YouTube Premium. If not, here’s the address:
The Place
175 High Holborn
London
WC1V 7AA
UNITED KINGDOM
Or you can email them on their website.
https://www.leftbankpictures.co.uk/
Let me know if you’ve done it, OK?

I sent from their site. Such a shame that quality never wins over all the reality junk now trying to pass for entertainment.

Yes it was cancelled too soon, very good show

This was a very good depiction of life in London during WW2 I am very sorry it was cancelled. Does anyone know the reason for the cancellation?

What a great series, don’t cancel it, hopefully there will be a 2nd series.

Come on, guys! Sign up on this petition, please.
https://www.change.org/p/itv-we-want-series-2-of-the-halcyon

An excellent look at life during war with the back drop of a classy hotel. WHY WOULD YOU CANCEL IT?

I have watched the 1st series at least 10 times. I love all the characters, so real & believable. I’m honestly heartbroken it’s not returning.

I like the show. I think it was cancelled to soon . Hope they bring it back/

Loved the show. Please bring back!! Why was it cancelled????

Please continue the series! The characters were wonderful along with the costumes and music!

I loved the show especially the ending. The actors were wonderful. I would love to see it return. Please bring it back.