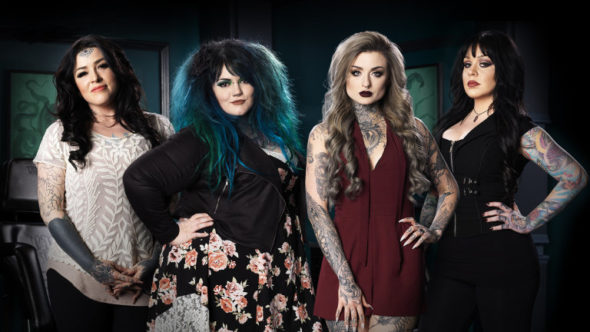 Ink Master: Angels will be back. Recently, Paramount Network announced they’ve renewed the TV show for a second season.

The tattoo competition series follows former Ink Master competitors Ryan Ashley, Kelly Doty and Nikki Simpson as they “travel the country and go up against some of America’s most talented tattoo artists.”

Paramount Network has ordered 10 episodes of Ink Master: Angels for season two, which is slated to premiere in 2018.

New York, NY, November 21, 2017 – The original tattoo-competition “Ink Master: Angels” has been renewed for a second season by Paramount Network. The series from Truly Original features three of the top female competitors from Season 8 of flagship series “Ink Master” – Ryan Ashley, Kelly Doty and Nikki Simpson – who travel the country and go up against some of America’s most talented tattoo artists. Competitors will face a variety of tattoo-based challenges to see who has what it takes to beat the “Angels.” The second season of 10 hour-long episodes will debut on the Paramount Network in March 2018.

Chachi Senior, Senior Vice President, Alternative Programming & Development, Spike/Paramount Network, who made today’s announcement, said, “I am thrilled that the Angels are hitting the road again; Ryan, Kelly, and Nikki are a fierce combo and I look forward to another round of them going head to head against America’s best tattoo artists.”

Added Executive Producer and Truly Original co-CEO Glenda Hersh, “The popularity of the Ink Master franchise has grown alongside our culture’s fascination with and respect for the art of tattooing. We’re thrilled to continue working with Chachi and the team at Paramount Network to celebrate so many talented and diverse artists.”

The Season 2 premiere of “Ink Master: Angels” will accompany the roster of bold original scripted and non-scripted series joining Paramount Network including WACO, American Woman, Heathers, Yellowstone, It Was Him: The Many Murders of Ed Edwards, Rest In Power: The Trayvon Martin Story, etc.

What do you think? Have you seen Ink Master: Angels? Will you watch season two?