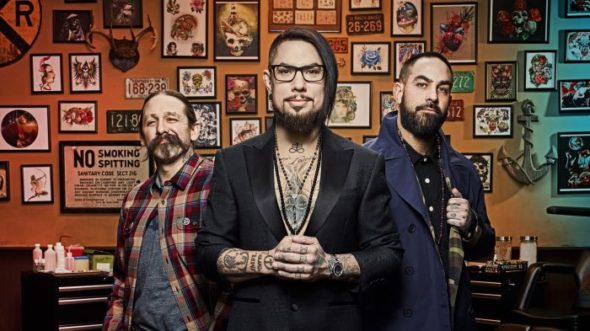 The spin-off “will provide former Ink Master contestants the opportunity to settle vendettas with their biggest rivals against whom they previously competed. Former Ink Master champions Ryan Ashley (Season 8), DJ Tambe (Season 9 and Season 10) and Cleen Rock One (Season 11) will serve as judges.” The series is slated to debut on Paramount this fall.

Meanwhile, season 12 of Ink Master is set to debut on Paramount Network on June 11th at 10 p.m. ET/PT.

New York, May 7, 2019 – Paramount Network is expanding its popular Ink Master franchise across platforms, with a two-season renewal of the highly-rated hit original tattoo-competition series and an order for a new spinoff series, Ink Master: Grudge Match. In addition, Paramount Network has launched a stand-alone Ink Master channel on YouTube, which will be the new home for all Ink Master video content.

Season 12 of Ink Master, titled Ink Master: Battle Of The Sexes, will premiere Tuesday, June 11 at 10 p.m. ET/PT (watch the trailer here). The new season features teams of male and female artists competing against each other in the ultimate battle for a chance to win $100,000, an editorial feature in Inked and the coveted “Ink Master” title. Past contestants and fan favorites will return throughout the season to coach the teams in various challenges during the competition. Season 13 is slated to premiere in 2020. Each season will consist of 16 one-hour episodes.

Produced by Truly Original and hosted by Dave Navarro, Ink Master continues to be a ratings powerhouse for Paramount Network. Season 11, which concluded this past December, was the #1 reality series on ad-supported cable among Men 18-49 and a top 10 reality series among Adults 18-49, while the franchise is currently the most socially-engaged Paramount Network series and boasts over 365 million lifetime cross-platform video views.

“The popularity of tattoo culture is at an all-time high, so I am thrilled to expand the incredibly successful Ink Master franchise across multiple platforms and touchpoints for our fans,” said Keith Cox, president, Development and Production for Paramount Network and TV Land. “Each new season of Ink Master brings forth heightened interpersonal drama and the stakes will be raised yet again in season 12’s Battle Of The Sexes and the fall premiere of Grudge Match. Additionally, the new YouTube channel will feature the most infamous moments from past seasons, content from upcoming seasons and exclusives that fans won’t want to miss.”

“With Ink Master, the longer we engage and delve into the tattoo world, the more artistry and complexity we uncover,” said Truly Original Executive Producers Glenda Hersh and Steven Weinstock. “Twelve seasons in, the franchise continues to surprise and inspire us – we love getting to deliver that same experience to viewers, and appreciate the great partnership with Paramount Network that allows us to do it.”

Each week Ink Master puts artists through a series of tattoo challenges that not only test the artists’ technical skills, but also their on-the-spot creativity, as they must create and execute an original tattoo on a “human canvas.” The masterpieces the artists create will last a lifetime – and so will their mistakes. After every challenge, the contestants face a tough panel made up of series host Dave Navarro and world renowned tattoo artists Chris Nunez (Miami Ink) and Oliver Peck (Elm Street Tattoo).

Ink Master: Grudge Match joins Paramount Network’s roster of unscripted series which is led by companion series, Ink Master, and the long-running Bar Rescue (recently-renewed for a seventh season), along with the Emmy(R) Award-nominated Lip Sync Battle and the recent reboot of the iconic Wife Swap. In addition, Bar Rescue spin-off series, Marriage Rescue, will premiere on June 2. Paramount Network’s scripted roster is headlined by Yellowstone, which returns for its second season on June 19 and was 2018’s most-watched new cable series, ranking second across all of cable TV series for the year (5.1 million total viewers per episode). Joining Yellowstone on the scripted front is the recently announced straight-to-series greenlight, 68 Whiskey, from Ron Howard and Brian Grazer’s Imagine Entertainment, and the new Darren Star series, Emily in Paris starring Lily Collins.”

What do you think? Are you a fan of Ink Master? Will you watch the new spin-off series?