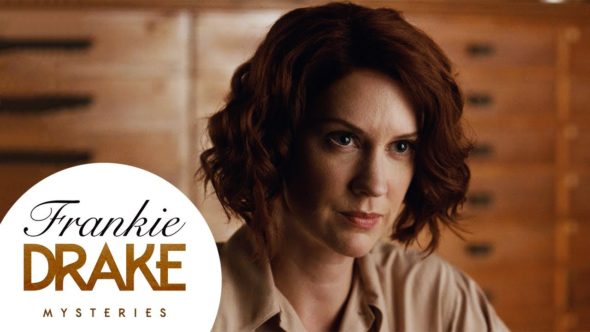 Time to get ready for more Frankie Drake Mysteries. The return date for the series has been revealed. Season four will premiere in April. The teaser for the return of the series reveals that Frankie Drake will take on more challenging cases during the new season.

“Ovation, America’s only arts network, has announced the premiere date for the third season of Frankie Drake Mysteries. The new season will premiere on Ovation on Saturday, April 4th at 7pm ET / 4pm PT, promising a slate of new adventures as the ladies of Drake Private Detectives take on more challenging cases and face off against some impressive foes.

Frankie Drake (Lauren Lee Smith) and Trudy Clarke (Chantel Riley) continue to rely on Mary Shaw (Rebecca Liddiard) and Flo (Sharron Matthews), who are always ready to lend a hand snooping through police files or sneaking a peek at an autopsy report. Mary’s newfound confidence at the police station, and in life, leaves her frustrated with her status as a morality officer and pushes her towards exciting new professional goals. Meanwhile Flo finishes her in-class portion of medical school and looks forward to her clinical training in-hospital, all while juggling a long-distance beau and the varied demands of Drake Detective cases. As Trudy’s love life with Bill Peters (Romaine Waite) heats up, she also excels at her investigative work, taking on some truly hair-raising risks as she works to solve cases. And finally, Frankie continues to lead the team with aplomb and ingenuity, while exploring a romantic connection with boxer Moses Page (Emmanuel Kabongo).

What do you think? Are you excited for the return of Frankie Drake Mysteries?

Love this show and can’t wait for it’s retun. Characters real and
and look forward to season 3.

Love Frankie Drake. Hope it continues or comes to ACORN

Just discovered this show. Absolutely love it! Have watched all episodes. Can’t wait for season 3. Please keep them coming!

Yes am excited and cannot wait for more Frankie.

I am glad Frankie Drake is coing back. Also love the return of Murdoch Mysteries and Midsomer Mysteries.

Glad Frankie is back with the gals, but not liking the Moses link. Was glad to see that go. Loved Hemmingway and Greyson characters as we can identify with them. A boxer? Not so much. How about ice hockey, of course there are not any blacks playing hockey.

Yes iam happy the frankie Drake mysteries are coming back

I am very excited that the Frankie Drake Mysteries is returning for a new third season. I would be ecstatic if it was returning to Public Television and not another pay for view business station.