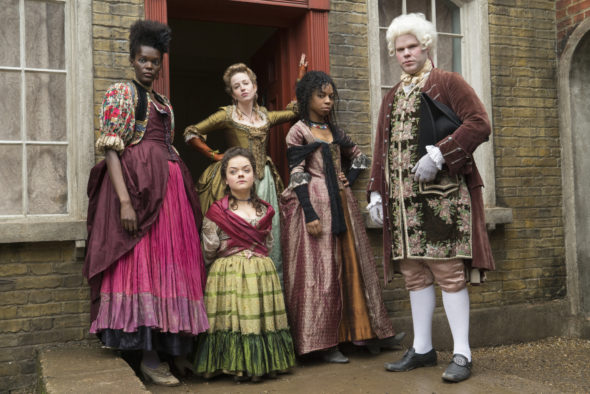 What does fate have in store for London’s Covent Garden ladies? Has the Harlots TV show been cancelled or renewed for a third season on Hulu? The television vulture is watching all the latest TV cancellation and renewal news, so this page is the place to track the status of Harlots, season three. Bookmark it, or subscribe for the latest updates. Remember, the television vulture is watching your shows. Are you?

Unless they decide to publicize viewership statistics, it is difficult to predict whether Hulu will cancel or renew Harlots for season three. For now, I’ll keep an eye on the trades and update this page with breaking developments. Subscribe for free Harlots cancellation and renewal alerts.

What do you think? Are you glad that the Harlots TV series has been renewed for season three? How would you feel if Hulu had cancelled this TV show, instead?

Love Harlots. My husband and I cannot wait for season 3.

Me and my husband are so so so excited to hear about season 3 of harlots!!!! Im sure so many people agree and we are such huge fans of this show we would be absolutely devistated if harlots got cancelled. I personally would be fall into a deep depression and pissed off coma. I would be so livid!!!! Please keep harlots going and going!!!! #harlotsforever

Please renew! Excellent show! We need closure as to what happens to Margaret; Lady Fitz & her deplorable brother; CHARLES…….etc…

LOVE the show. Please renew it for a 3rd season. Need to know of Lydia remains in bedlam or if she’s tough enough to endure it. Same goes with Margaret’s travels to Virginia on the prison ship…..Lot’s of loose ends to tie up.

We must find out what happens to Margaret, please renew!!!