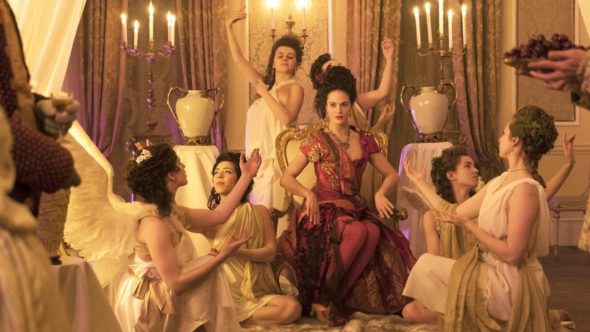 Hulu is hungry for another season of Harlots. Today, the streaming service announced they’ve renewed the TV show for a third season.

Hulu has ordered eight episodes for season three of Harlots. A premiere date has not yet been announced, but you can read more info below:

Set against the backdrop of 18th century Georgian London, Harlots continues to follow the fortunes of the Wells family. Margaret (Samantha Morton) has been sent to America in chains; Lydia Quigley (Lesley Manville) is vanquished and in Bedlam. It seems that the Wells girls can free themselves of their mother’s feud, but running a lucrative brothel brings new enemies. Meanwhile Lydia, in her darkest hour, still finds a way to bite. Inspired by the stories of real women, Harlots is a powerful family drama as explored from the female perspective. The series hails from the creative team of Moira Buffini, Alison Newman, Alison Owen, Debra Hayward and Alison Carpenter.”

What do you think? Have you seen Harlots? Are you glad it’s coming back?

I recently new to Harlots. YES!!! I’m very excited it is going to be back. Thank you.

Yeehaw, turn it up, right on! Should be AT LEAST 16 Episodes per season!!!