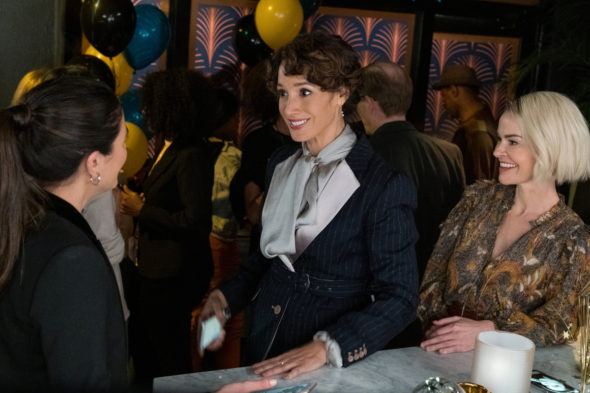 The L Word: Generation Q is adding to its cast for its second season. The Showtime series has just begun filming episodes in Los Angeles for the new season, which will debut in 2021. Cast in recurring roles, Rosie O’Donnell, Donald Faison, and Griffin Dunne are joining regulars Jennifer Beals, Katherine Moennig, Leisha Hailey, Jacqueline, and Arienne Mandi.

It is not known if others that appeared in season one of the series are returning for season two. The sequel of the original L Word TV show follows the lives of new and original series characters as they live in Silver Lake, Los Angeles.

Showtime revealed more about the additions to the cast of The L Word: Generation Q in a press release.

“O’Donnell will play Carrie, a brash and kindhearted public defender who is thrust into Bette’s life and quickly gets under her skin. In addition to hosting and executive producing the Emmy-award winning series The Rosie O’Donnell Show, O’Donnell is also known for her co-hosting stint on The View and the SiriusXM show Rosie Radio. Her television credits include roles in the SHOWTIME series SMILF, Curb Your Enthusiasm, I Know This Much Is True, The Fosters and Mom. Her vast film credits include A League of Their Own, Sleepless in Seattle, Harriet the Spy and Another Stakeout. O’Donnell has appeared on Broadway in shows such as Grease, Seussical and Fiddler on The Roof.

Faison will play Tom, a self-deprecating editor who works with Alice. Best-known for his nine-season role as Dr. Turk in the Emmy-nominated comedy series Scrubs, Faison was last seen starring in Emergence and in the SHOWTIME series RAY DONOVAN. His film credits includes roles in Game Over, Man!, Little Evil, Kick-Ass 2, Remember the Titans and Clueless. In addition to appearing on screen, Faison has an expansive voice-over career, appearing in animated shows such as Robot Chicken and Star Wars: The Clone Wars.

Dunne will play Isaac, one of the biggest international art mega-dealers who Bette comes to know. Known for his work in front of and behind the camera, Dunne made his directorial debut with the film Addicted to Love and recently directed and produced Joan Didion: The Center Will Not Hold. His on-screen television credits include the SHOWTIME series HOUSE OF LIES, Girls, I Love Dick and This Is Us, in which he currently stars. His film credits include roles in War Machine, Dallas Buyers Club and After Hours.”

Jordan Hull, the actress that appears on the series as the daughter of Bette Porter (Beals), has also seen her character bumped up to series regular status.

A premiere date for season two of The L Word: Generation Q has not yet been set.

What do you think? Are you a fan of The L Word: Generation Q? Will you watch season two in 2021 on Showtime?

Absolutely loved the L Word; watch reruns constantly. But am also a huge fan of L Word Gen Q. I’m all IN. 100%. However, I am a fan of ANYTHING that the Breathtaking Jennifer Beals is in. Love Her. Truly believe she’s one of the most beautiful women I’ve ever seen. And gets better with age.

Can’t wait for the return!!!

The L Word is THE best show on TV, period. I have been a fan since the original and am SO HAPPY that it is back and for a second season. I’d love to see it continue forever, like daytime soaps. It’s that good. It would be nice to have some closure for the Jenny storyline, though. Who actually killed her and why?

If you listen to Alice closely in the last episode of the last season of the original l word, you’ll hear her whisper in tashas ear that she killed her, after Tasha walks into Bette and Tina’s house.

Looking forward to the next season. Thank you for bringing it back.

LOVED, loved, loved The L Word! I’m not a fan of this show – it seems that politics and political correctness have taken a front seat to the story lines. I can’t get into the plot(s) because it feels like I’m watching a lecture or something…

10 words: We love the show..keep the seasons and episodes coming