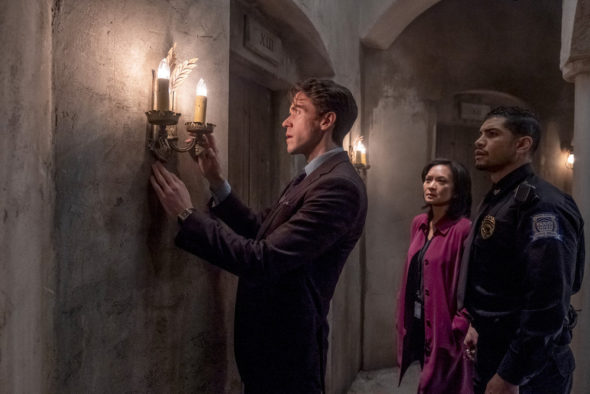 The adventure won’t continue. Peacock has cancelled Dan Brown’s The Lost Symbol so there won’t be a second season. The first season of 10 episodes began airing last September and the finale was released on November 18th.

A thriller drama series, the Dan Brown’s The Lost Symbol TV show is based on Brown’s bestselling novel and stars Ashley Zukerman, Valorie Curry, Sumalee Montano, Rick Gonzalez, Eddie Izzard, and Beau Knapp. The series follows the promising young Harvard professor Robert Langdon (Zukerman) who finds himself pulled into a complex mystery when his former mentor, Peter Solomon (Izzard), is kidnapped. Armed with a deep knowledge of history, symbols, and dead languages, Langdon must work together with Peter’s daughter, Katherine (Curry), and other allies to find the Lost Symbol and thwart a chilling global conspiracy.

“We were so proud to bring this action-packed mystery thriller to our members and enjoyed watching this compelling series unfold with a satisfying, complete story,” the streamer said Monday in a statement to Deadline. “We’re grateful to Dan Dworkin, Jay Beattie, Dan Brown, Brian Grazer and Ron Howard along with CBS Studios, Imagine Television and UTV for bringing this international bestselling novel to life.”

Check out our status sheets to track new TV series pickups, renewals, and cancellations. You can find lists of cancelled shows here.
What do you think? Have you watched The Lost Symbol TV show on Peacock? Are you glad to hear that this drama has been renewed for a second season?

It is so disappointing to find a series you like, and then those that be cancel it after the first season. Very Disappointed

As a #1 Dan Brown Fan & having watched the series “The Lost Symbol” with several friends, we are all VERY disappointed to know the series was canceled!!
Rethinking my Peacock subscription!

To my surprise, I really liked the series. I am very much NOT a Dan Brown fan, but the story was tight and the acting was very good. It ended on a “soft” cliffhanger, with the male lead mentioning something about stories in the future.

I liked the series

I watched the first episode and couldn’t believe how bad it was.

Does anyone know if this had an ending or did it finish on a cliffhanger? I think I’ve only watched 3 episodes so far

It wraps up nicely.