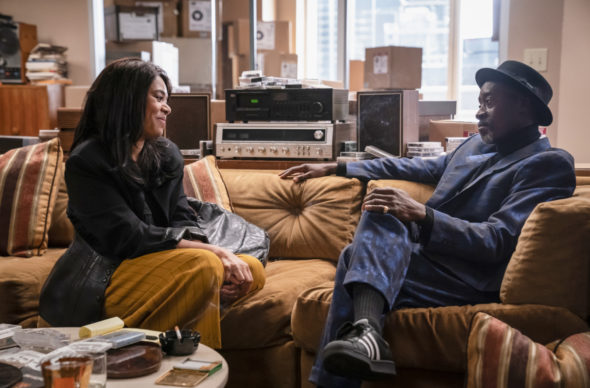 The story of these underdogs won’t continue. Showtime has cancelled the Black Monday TV series so there won’t be a fourth season.

A dark comedy series, Black Monday stars Don Cheadle, Regina Hall, Paul Scheer, Andrew Rannells, Casey Wilson, and Yassir Lester. The story began with Maurice “Mo” Monroe (Cheadle) and his group of outsiders taking on the old-boys club of 1987 Wall Street, ultimately leading to the largest stock market crash in history. Season two followed Dawn (Hall) and Blair (Rannells) as they took over the TBD Group, while Mo (Cheadle) and Keith (Scheer) fled to Miami. At the end of season two, Dawn took the hit for Black Monday, and Mo reigned supreme as head of the newly minted The Mo Co. Season three tells the story of what lies in store for him, his band of underdogs, and his enemies.

The third season of Black Monday averaged a 0.02 rating in the 18-49 demographic and 100,000 viewers in the live+same day ratings. Compared to season two, that’s down by 5% in the demo and down by 12% in viewership. It’s one of Showtime’s lowest-rated shows.

In a Twitch live stream, Scheer broke the news about Black Monday’s cancellation. He joked that he hadn’t watched the Yellowjackets series yet because Showtime had cancelled Black Monday and he was boycotting the channel. Scheer acknowledged that the series has been cancelled for many months but that no one had previously talked about it. He also joked that he’d now have to return the boats that he’d purchased with the season four money he expected to receive.

Season three finished airing in August. Black Monday lasted for 30 episodes, running from 2019 until 2021. SpoilerTV was first to spot the cancellation.

What do you think? Have you enjoyed watching the Black Monday TV series? Are you sad to hear that this Showtime series won’t be renewed for a fourth season?

1 Comment
Inline Feedbacks
View all comments
Can I be true

This is really depressing. When I look at CBS network in the crap that’s being produced and showing on network TV and then she was like this that have some real value of understanding history even though it’s a farce. I’ve just given up. The showing had its moments of stupidity but if you like this genre of style there’s no reason why the show can’t continue. It just seems like people want simple fantasy characters and not something that really does affect our lives in the way.