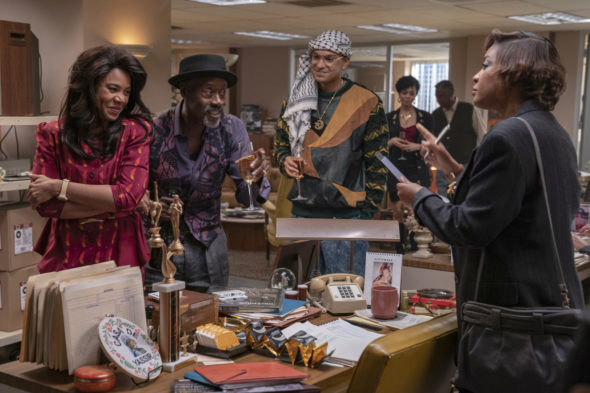 Are only good times ahead for Mo and The Mo Co.? Has the Black Monday TV show been cancelled or renewed for a fourth season on Showtime? The television vulture is watching all the latest cancellation and renewal news, so this page is the place to track the status of Black Monday, season four. Bookmark it, or subscribe for the latest updates. Remember, the television vulture is watching your shows. Are you?

Airing on the Showtime cable channel, Black Monday stars Don Cheadle, Regina Hall, Paul Scheer, Andrew Rannells, Casey Wilson, and Yassir Lester. The story began with Maurice “Mo” Monroe (Cheadle) and his group of outsiders taking on the old-boys club of 1987 Wall Street, ultimately leading to the largest stock market crash in history. Season two followed Dawn (Hall) and Blair (Rannells) as they took over the TBD Group, while Mo (Cheadle) and Keith (Scheer) fled to Miami. At the end of season two, Dawn took the hit for Black Monday, and Mo reigned supreme as head of the newly minted The Mo Co. Season three tells the story of what lies in store for him, his band of underdogs, and his enemies.

The third season of Black Monday averaged a 0.02 rating in the 18-49 demographic and 100,000 viewers in the live+same day ratings. Compared to season two, that’s down by 5% in the demo and down by 12% in viewership. Find out how Black Monday stacks up against other Showtime TV shows.

Will Showtime cancel or renew Black Monday for season four? This show gets low ratings but is one of the channel’s higher-profile shows. As long as this cast wants to stay on board, I think the show will be renewed for a fourth year. I’ll update this page with breaking developments. Subscribe for free alerts on Black Monday cancellation or renewal news.

What do you think? Were you hoping that the Black Monday TV show would be renewed for a fourth season? Are you sorry that Showtime cancelled this TV series, instead?

Please renew to season 4 and beyond

I have one more episode left in the 3rd season and I really hope this next one isn’t the end of Black Monday. Regina Hall is the best part of the show and I need her on TV, even if it’s only 10 weeks out of the year.