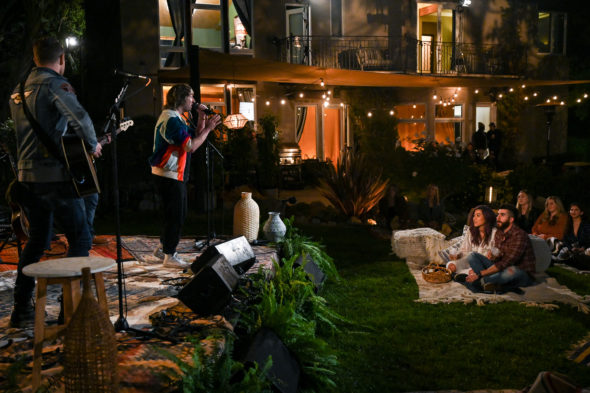 An ABC dating reality series, The Bachelor: Listen to Your Heart is part of the successful Bachelor franchise and is also hosted by Chris Harrison. In the show, 20 single men and women embark on a journey to find love through music. Singing well-known songs, both individually and as couples, the participants look to form attractions through the melodies, find and reveal their feelings and ultimately, fall in love. The harmony of the couples will be tested through musical challenges, including live performances which are judged by big names in the music business. Ultimately, the couples whose performances reveal their love and devotion to one another will continue to be given a chance to further their relationships until only one couple is left standing. Celebrity guests include Jason Mraz, Kesha, Toni Braxton, Andy Grammer, Pat Monahan, Ashlee Simpson-Ross, Evan Ross, Rita Wilson, Jewel, and Taye Diggs. Bachelor Nation veterans JoJo Fletcher, Jordan Rogers, Rachel Lindsay, Bryan Abasolo, Kaitlyn Bristowe, Jason Tartick, and Arie and Lauren Luyendyk Jr. also appear.

Very interesting show, we love the singing and what they come up with, please renew it for another season. I liked how they had someone to relate to from another show to see how they did.

They can’t sing.
I fast forwarded through the first two episodes.
On the third episode I deleted it before it finished recording…cancel not worth it and was the worst of any Bachelor shows to date

Please Renew This Show I Love The Singing.. The Drama.. And Seeing People Fall In Love ❤️

As far as I am concerned, cancel it !! I watched for 10 minutes and besides the singing part, it was still crying, whining, high schoolers!!! No thank you !