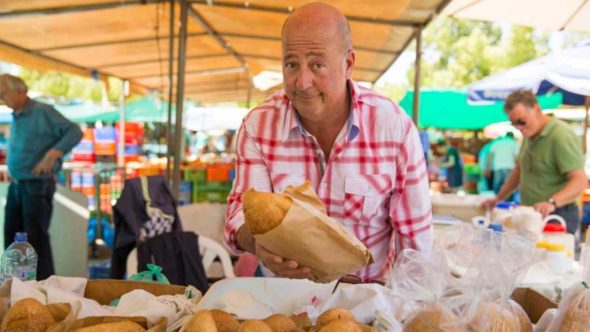 Andrew Zimmern is staying put on the Travel Channel. Recently, the network announced they’ve renewed The Zimmern List for a second season.

The docuseries follows Zimmern as he “shares his personal recommendations on the food, and places where, he most loves to eat.”

Travel Channel has ordered 16 episodes for season two of The Zimmern List, which begins production in June. Read more info below:

NEW YORK – (May 7, 2018) – Travel Channel’s new hit series, “The Zimmern List,” hosted by one of the world’s most well-traveled food explorers, Andrew Zimmern, has been picked up for a second season. In the series, Zimmern shares his personal recommendations on the food, and places where, he most loves to eat. With the greenlight of 16 new half-hour episodes, he continues as the ultimate tour guide. Since its premiere in March, “The Zimmern List” is among Travel Channel’s highest rated series, posting double digit rating increases year over year. It has been seen by more than 10 million total viewers. Production on the new season begins in June.

“This show is really very personal to me, but also very easy for fans to duplicate,” said Zimmern. “It’s about being really friendly and making it actionable. When I’m living with an African tribe, traveling by boat, not very many people are able to do that. In ‘The Zimmern List,’ anyone can go and do what I’m doing.”

“While Andrew has been known for years for his adventurous palate, with ‘The Zimmern List,’ in every scene, viewers experience the food and restaurants he truly loves,” said Jane Latman, general manager, Travel Channel. “This series showcases the places and people Andrew seeks out when he wants to enjoy the most delicious food. He is an incredible and wholly entertaining guide.”

The freshman season of “The Zimmern List” continues in premiere episodes through June 26 on Tuesday nights at 9:00 p.m. ET/PT. On May 8, Zimmern starts his Chicago food tour with Windy City classics like hot dogs and deep-dish pizza. Then he drops by other local hot spots including one of the best barbecue joints and a restaurant with three Michelin stars.

What do you think? Have you seen The Zimmern List? Are you glad it’s coming back?

I love Andrew and his shows. He is a wonderful example of a person who has made mistakes but was able to remake himself.

Travel Channel shows only a few reruns of food shows. What happened? Haunted shows are uninteresting to say the least.

Very happy Andrew got another season, love the show.