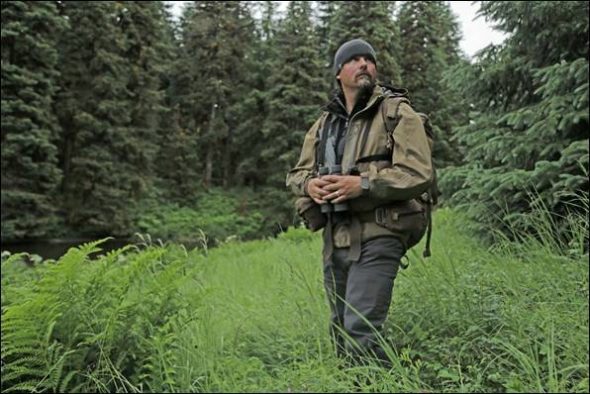 Travel Channel is getting wild. Recently, the network announced their new TV show, Monster Encounters, will premiere in October.

The docuseries follows wildlife expert Casey Anderson as he “travels to remote corners of the earth in search of elusive creatures.”

NEW YORK (September 19, 2018) – Wildlife expert Casey Anderson is not afraid to get dangerously close to the largest and fiercest creatures on the planet. In Travel Channel’s new series “Monster Encounters,” premiering on Tuesday, October 30 at 10:00 p.m. ET/PT, his mission is to track down and document evidence of animals so large, or unusual, that they defy belief. Employing the latest technologies and his lifetime of wildlife experience, Anderson travels to remote corners of the earth in search of elusive creatures. Throughout the eight hour-long episodes, he leaves no stone unturned, collecting clues and connecting the dots until he gets up-close and personal with the beasts he seeks.

“I traveled to some of the earth’s most inaccessible regions. My daily commute to work put me on the back of elephants, in acrobatic helicopters, or on a ride in a speed boat along rivers in the middle of nowhere,” said Anderson. “I found myself in places with names like ‘Devil’s Cave,’ ‘The Elephant Graveyard’ and ‘The Death Road.’ I was attacked repeatedly by a massive crocodile in the Zambezi River, wrestled a giant anaconda in the Amazon and was bitten and feasted upon by a vampire bat in Mexico – and this is just the first season!”

In the premiere episode, appropriately airing before Halloween, Anderson heads to Mexico to find out if vampire bats are attacking humans. He learns the bats have been fattening up on cattle, and as a result their population has grown as much as 25 percent. Heading directly to the source – the country’s caves and cattle ranches – Anderson risks his safety to become the prey in his hunt for a mega-colony of bloodsuckers. After meeting a rancher who claims he was bitten by a bat, Anderson recreates the scene hoping that he too will be bitten – and it’s a terrifying success. Undeniable proof that bats are feeding on humans!

When national parks report man-eating tigers attacking local villagers, Casey Anderson heads to Nepal to lead a search for rogue cats. By elephant back, raft and on foot, Anderson moves into the killing zone to track the man-killers.

Following reports that a renegade giant man-eating crocodile named Bizmark is terrorizing the Zambezi River, Casey Anderson heads to Zimbabwe and Zambia to launch an investigation. Working with local crocodile experts, he meets with witnesses and heads far downriver toward Lake Kariba, ground zero for crocodile attacks. Anderson puts his own life at risk as he goes into a custom-built crocodile cage to try and trap the fierce reptile.

Spurred by reports that a presumably extinct predator may still be alive, Casey Anderson heads to Australia to investigate mysterious sightings and attacks by a marsupial lion. But as Anderson heads deep into the wilderness, he finds that the evidence points to another possible mystery.

Casey Anderson is a wildlife expert, filmmaker, adventurer and explorer. He has spent the last 24 years traveling the world, capturing wildlife and nature through the camera lens. Born and raised in Montana, Anderson spent his childhood exploring the vast wilderness that was literally in his back yard. Photographing and videoing his adventures was a way for Anderson to provide his outrageous accounts in the wild to his classmates. By the age of 18, he found himself guiding wildlife filmmakers into remote locations to track and film the most elusive wild animals. At age 26, Anderson adopted an orphaned baby grizzly bear, which led him to co-found the Montana Grizzly Encounter – a sanctuary for grizzly bears saved from inhumane situations.

What do you think? Are you a fan of wildlife documentaries? Will you check out Monster Encounters?

Love this show! And Casey! I hope TVL channel sticks with it! ALL THE GOOD SHOWS GET DROPPED AND WE’RE LEFT WITH “KARDASHIAN KRAP”