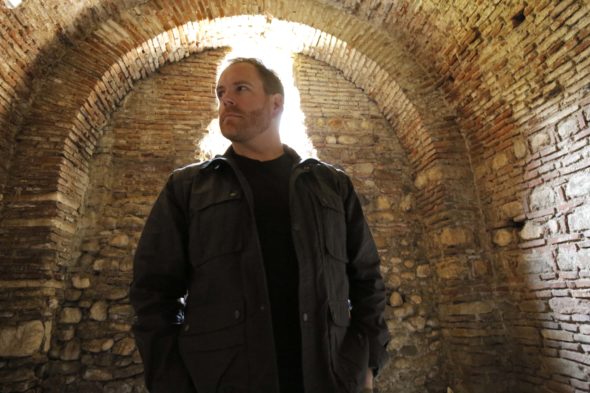 Where is Josh Gates headed to next? Travel Channel just announced the premiere date for season two of Legendary Locations.

The docuseries follows Gates as he “showcases the surprising stories behind locations brimming with mythic histories, surprising backstories and newly uncovered secrets.”

NEW YORK (March 1, 2019) – Adventurer and explorer Josh Gates (“Expedition Unknown”) pursues the unexpected stories behind fabled places around the globe in the return of Travel Channel’s “Legendary Locations,” premiering Tuesday, April 2 at 10 p.m. ET/PT. With 13 all-new episodes – expanded into an hour-long format for the show’s second season – Gates showcases the surprising stories behind locations brimming with mythic histories, surprising backstories and newly uncovered secrets. With the help of historians and local experts, he illuminates new findings from the places you thought you knew and sheds light on those you never knew existed.

“As I continue my travels and adventures, it never ceases to amaze me how many incredible and surprising stories are tucked away in every corner of the globe,” said Gates. “Whether it’s the myth of underground tunnels beneath the city of Portland, Oregon, or Henry Ford’s lost city in the Amazon rainforest, I’m excited to bring our viewers around the world to explore these truly legendary locations.”

In the season premiere, Josh Gates explores both the natural – and the supernatural. He examines an ancient cathedral made entirely of salt, buried 20 stories beneath the streets of Wieliczka, Poland, and a mysterious symbol in Sicily believed to be written by a nun under demonic possession. Additional stories include a haunted asylum in upstate New York, the intriguing tale of Brazil’s booming coffee industry and more.

From West Virginia’s secret underground government bunker to a Japanese town that survived a massive tsunami, Josh Gates highlights legendary locations where the end of the world is just the beginning.

Josh Gates takes us to places where perseverance paid off – from a New England town where the wrongfully accused stood their ground to a Japanese mountain where self-starvation for the common good was an honored tradition.

From an abandoned American dream in the Amazon jungle to an abbey in France where countless souls lost their lives, Josh Gates reveals legendary locations where man has battled the forces of nature.

From a samurai smackdown in Japan to a writer finding inspiration at a Boston fort, Josh Gates shares locations where people’s vocations compelled them to act in the name of passion and dedication.

What do you think? Have you seen Legendary Locations? Will you watch the new season?

Thrilled that this has been renewed! Look forward to another great season with Josh and his crew!

Love Josh Gates in anything he does. Takes us to places we’ll never see. Love his humor and when he goofs up and that he includes his crew. Travel on Josh!