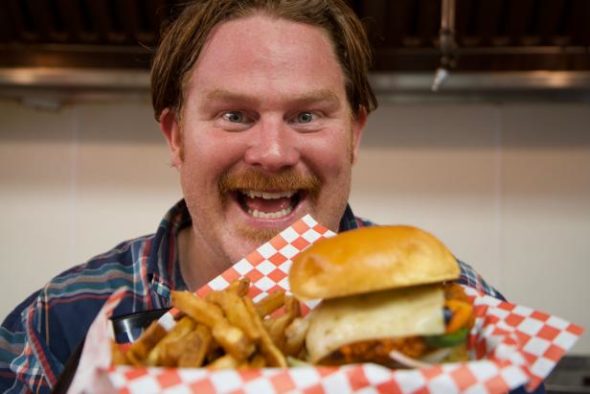 The new season will see Casey Webb travel to “14 new cities for a slew of bigger, bolder challenges including a cauldron of pho in Baltimore, a colossal crepe piled high with Thai ice cream in St. Paul, Minnesota, and a 5-pound platter of Tater Tot nachos in Atlanta.”

Season seven of Man v. Food premieres on Travel Channel on May 28th at 9 p.m. ET/PT.

NEW YORK (May 2, 2018) – Casey Webb continues the pursuit of his next culinary conquest with the fiery return of Travel Channel’s “Man v. Food,” premiering with new back-to-back episodes on Monday, May 28 at 9 p.m. and 9:30 p.m. ET/PT. This season, Webb travels to 14 new cities for a slew of bigger, bolder challenges including a cauldron of pho in Baltimore, a colossal crepe piled high with Thai ice cream in St. Paul, Minnesota, and a 5-pound platter of Tater Tot nachos in Atlanta. The premiere episodes take Webb to his childhood stomping grounds along the New Jersey shore and the Midwest’s fast-growing foodie destination: Minneapolis.

“I’m hungry for more of what the country has to offer, and I’m pumped to hit the road to meet new people and take on more outrageous challenges,” Says Webb. “I want to know more about a city’s over-the-top must eats and the people who create them.”

The season opener begins beachside at the popular New Jersey shore – and Casey Webb’s own hometown. Webb hits up local spots including the Speak Eatery to check out the Hand Grenade, a sandwich piled high with everything from ribs to mac ‘n’ cheese. Then, he visits the 100-year-old New Jersey institution Bahr’s Landing, where a 6-pound crabmeat stuffed lobster takes center stage. Finally, Webb heads over to Papa Pancho for the Spicy Pizza Challenge – a pizza topped with a concentration of ghost chili sauce so spicy that competitors must first sign a liability waiver for both physical and emotional damage! With the help of his family cheering him on in the crowd, Webb faces off on his spiciest challenge yet.

The night’s second premiere stops in Minneapolis – home of the Juicy Lucy, a burger with a cheesy secret. At the Blue Door Pub, they are putting a new spin on the Minnesotan classic. Then, a trip to the quirky Betty Danger’s Country Club takes brunch to the next level with a Ferris wheel full of sliders and bacon. Finally, at Lu’s Sandwich, Webb faces a massive bahn mi nearly 3 feet long, and he only has 30 minutes to try and beat the beefy behemoth.

What do you think? Are you a fan of Man v. Food? Will you watch the new season?