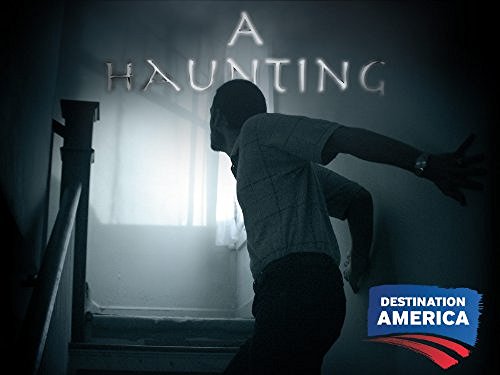 TLC is getting set for Halloween early. Recently, the network announced new series Kindred Spirits and a new season of A Haunting (which has moved from Destination America) will premiere in October.

Kindred Spirits debuts on October 21st at 10 p.m. ET/PT, following the season premiere of A Haunting at 9 p.m. ET/PT and the debut of one-hour special Ghosts of Shepherdstown at 8 p.m. ET/PT.

(Silver Spring, MD) – It’s fright or flight on Friday nights! The world of the unknown debuts on TLC anchored by the new series KINDRED SPIRITS, which follows renowned ghost hunters Amy Bruni and Adam Berry as they help real families who are tormented by paranormal activity in their homes. Scared by the mysterious happenings, but hesitant to pick up and leave their homes, these families have turned to two of America’s leading paranormal investigators to capture evidence, guide the spirits into the light and bring closure to family. KINDRED SPIRITS premieres on Friday, October 21 at 10/9c immediately following the premieres of one-hour special GHOSTS OF SHEPHERDSTOWN at 8/7c and a new season of paranormal fan favorite A HAUNTING at 9/8c.

With the added stress that the spirits may be their own late family members, each episode of KINDRED SPIRITS introduces a new family that seeks help from Amy and Adam. In the premiere episode, the paranormal experts meet Catherine and her daughter, who live on a 34-acre property in Little Meadows, Penn. They’ve been experiencing multiple things that they cannot explain – smashed light fixtures, being woken up in their sleep and inexplicable scratches. It takes Amy and Adam multiple investigations to figure out who is bothering them, but more importantly, can they figure out why? It’s up to the experts to help this family reach closure by facilitating contact with the other side.

Kicking off Friday Night Frights on TLC is the all-new, one-hour special GHOSTS OF SHEPHERDSTOWN on Friday, October 21 at 8/7c. It’s been one year since a trio of ghost hunters investigated Shepherdstown, W.Va., to find out why it’s considered the most haunted town in America. In a community of 1,750 people, almost everyone has experienced something they couldn’t explain, resulting in an influx of 911 calls to Shepherdstown’s police department. In the special, cameras return to the haunted town for a check-in with residents and Police Chief Michael King to see if it’s still a hotbed for paranormal activity.

Then at 9/8c, paranormal fan favorite A HAUNTING returns with all-new episodes showcasing some of the scariest stories of supernatural activity. Through spellbinding first-person accounts, each episode profiles one family’s ghostly encounters. As the mystery and origin of each case is unraveled, audiences are left with a lingering sense that life after death is much more powerful than anyone could have possibly imagined.

What do you think? Do you watch TLC? Will you check out new series Kindred Spirits?

Oops 19 minutes into the start.

I love this show, its awesome. Im watching an episode now and im not sure if its just me that sees it or if anyone else does, the episode is called The Executioner and there is a picture on the wall back behind amys head of an elderly man and woman. The womans face looks like its missing! Its 9 minutes into the start. If anyone else sees this episode let me know what u think!

I loved the two of then when they were on ghost hunters in Syfy. So when I learned that Amy and Adam were making Kindred Spirits I was so excited. They are really good ghost hunters. I would watch the second season.