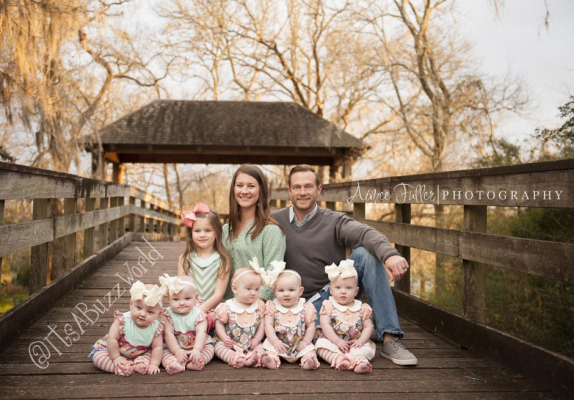 The OutDaughtered TV series premieres on TLC, Tuesday, May 10, 2016, at 10:00pm ET/PT. This reality series features Danielle Busby and Adam Busby, parents to the only all-girl set of quints in the US. The family also includes four year old daughter, Blayke Busby.

Get more details from this TLC press release:

The series premieres Tuesday, May 10th at 10/9c

New York, NY – 40 bottles a day, 420 diapers a week and feedings every three hours became the new normal for Danielle and Adam Busby when they welcomed home the only all-female set of quintuplets in the country. The family of three became a family of eight overnight, and TLC follows that incredible journey in the new series OUTDAUGHTERED premiering Tuesday, May 10th at 10/9c. The series captures Danielle, Adam and their adorable 4-year-old daughter Blayke as they adjust to their new life, while trying to hold on to the identities and lives they had cultivated before the five new additions arrived. Following the hilarious and heartwarming antics of the entire family including Danielle’s zany mother, Michelle, and her older twin sisters and their families, it’s all hands on deck as the family relies on their tight-knit circle to make the most out of this incredible lifetime adventure.

The hour-long episodes chronicle their journey of infertility and the celebration that followed when they learned they were having quints. From preparing for the birth to the three long months in the NICU, the series focuses on the babies’ delivery and then the first few months at home after their world is turned upside down. Balancing Blayke and their five new daughters is a daunting task, but Danielle, Adam and their extended family make an extra effort to ensure she still feels special.

Throughout the episodes, Adam and Danielle adjust to their new life and soon realize that a new home is a much needed next step. House hunting is difficult, though, when you are working against a tight budget. Viewers also get a peek into the first family photo shoot with the quints, and even though grandmother Michelle comes around to help, her tardiness sends the family into chaos. When Adam returns to work, one of the babies gets sick, and Danielle realizes how different life at home with the quints is without her partner in crime. Thankfully, her two sisters, Ashley and Crystal, are around to pitch in and keep Danielle sane as the family relies on each other to navigate this chaotic journey.

OUTDAUGHTERED is produced by The Boardwalk Entertainment Group for TLC.

TLC is a global brand available in more than 93 million homes in the US and 332 million households in 189 markets internationally. A destination online, TLC.com offers in-depth fan sites and exclusive original video content. Fans can also interact with TLC through social media on Facebook, Instagram, Pinterest and @TLC on Twitter as well as On Demand services, YouTube and mobile platforms. TLC is part of Discovery Communications (NASDAQ: DISCA, DISCB, DISCK), the world’s #1 pay-TV programmer reaching 3 billion cumulative subscribers in 220 countries and territories.

How do you like the sound of the OutDaughtered TV show? Do you plan to watch the premiere? Do you have any multiples in your family? Let us know, below.

I love the show! I think that Adams problems might stem from Danielle always having her way. He did not want the expensive house but she did so he bought it. He did not want to invest in the cycle shop but she did so they invested It was sad when Adam bought his drone & she really blasted him in front of the family. What does this poor guy get to do. He works all day & when he gets home she has a lot more work for him. He is under so much pressure! Danielle is a great… Read more »

Honestly I could slap that sad sacked husband. Get over it! Post party my ass

You have six kids. Read some positive thinking books and fake it till you make it

I have caught a couple of episodes. They need some major help in understanding child behaviors. It was awful. I felt very sorry for the children. It should come with a discalmer. Shame on you for letting this happen.

We absolutely love this show.

Love love this show such a beautiful family. Find this couple so cute and natural you can see the love without being soppy. You are both doing so well with your 6 babies love seeing all your children as they grow. I am from Australia so we might be a bit behind US hoping all goes well for baby Hazel,

Just love to show. Such love and kindness the parents give to each other. A real fantastic couple. The other show about Kate should be so embarrassed at the way she behaved. Adam and Danielle are wonderful. Thank you so much for showing the world these beautiful people.

I think I missed Season 2 Episode 13 part 2 of Qunits take Manhattan. Will it be shown again at any TV channel and if so when, what date?

when is it coming back on tv