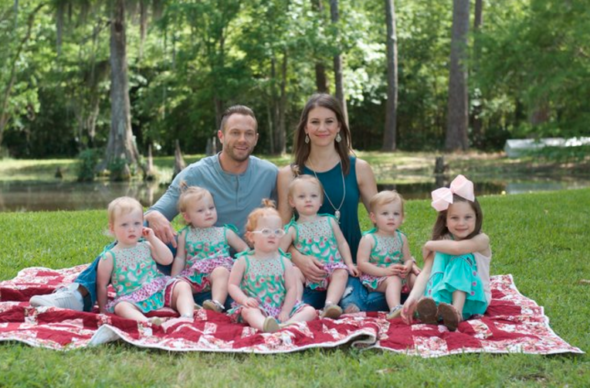 Parents, you aren’t alone. This week, TLC announced their TV shows, Outdaughtered and Rattledi, will return with new seasons in July.

A reality show, Outdaughtered follows Danielle and Adam Busby as they raise their all-female quintuplets and older daughter, Blayke. Meanwhile, Rattled provides “an in-depth look at the trials and tribulations of five couples as they learn to deal with parenting, relationships, finances and so much more.”

Season three of Outdaughtered premieres on TLC on July 10th at 8 p.m. ET/PT, followed by the season three debut of Rattled at 10 p.m. ET/PT.

(Silver Spring, MD) – Bring on the babies! TLC kicks off the family fun with an OUTDAUGHTERED special two-hour premiere on Tuesday, July 10 at 8/9c, followed by RATTLED at 10/9c. Everything’s changing for Danielle and Adam Busby, as America’s first and favorite all-female quintuplets grow from babies to big girls, and their wise-beyond-her-years, older sister Blayke begins to explore new hobbies and tread her own path in the Busby household. With big-girl beds, potty training and pre-school separation looming, Danielle and Adam must manage the moods, mayhem and magic that is life in the Busby house! Then, TLC’s candid parenting series RATTLED is back for its most dramatic season yet. Executive Produced by Flower Films’ Drew Barrymore and Nancy Juvonen, the ten, one-hour episodes will follow five new and returning couples as they learn how to live as partners and parents.

This season, Danielle and Adam Busby realize the only thing more challenging than raising five babies is keeping up with five rapidly growing toddlers! As the quints race out of their “terrible twos” and into the dreaded “three-nagers” phase, gone are the days when Olivia, Parker, Riley, Ava and Hazel could be contained in strollers, playpens and cribs. The Busby babies now have five strong and different personalities, and they’re guaranteed to make their opinions known since the quints are now talking up a storm!

Every day brings new experiences for the family, from walking the runway in a fashion show to taking a big family vacation to Hawaii! It’s not all fun and games, though, as Adam and Danielle manage the stress of six kids, running the cycle studio and unexpected setbacks including Hurricane Harvey and the threat of another surgery for Hazel. Through it all, the Busby family must face life with non-stop mayhem and merriment, and with six times the laughter, love, trials and tears.

Also for the first time, fans of the show can go behind the scenes with Adam and Danielle Busby on the TLC GO Original Series, OUTDAUGHTERED: INSIDE THE EPISODE. The series will be available on the TLC GO app with new episodes becoming available each Tuesday, immediately after the regular episodes premiere.

Raising children is a magical experience, but it does not come easy to most. With so much to keep track of and consider, unexpected complications make building a family even harder than most new parents expect. Season three of TLC’s RATTLED will provide an in-depth look at the trials and tribulations of five couples as they learn to deal with parenting, relationships, finances and so much more. The families featured this season include:

After sharing their story of surviving breast cancer and building a miracle family last season, Josh and Aly have gotten over some of life’s biggest hurdles, but their hard work is far from over. With three girls under the age of the three running around the house, Josh and Aly continue to experience big milestones and constant chaos.

Matt and Jamielynn met at a country bar and instantly connected over their quick wit and love of the wilderness. Matt has a two-and-a-half-year-old daughter from a previous marriage, and Jamielynn lost her first child in a previous pregnancy. When Matt and Jamielynn found out they were expecting, they were overjoyed at the thought of creating a family together. As Matt looks forward to giving his daughter a younger sibling, he and Jamielynn must work to build a strong life for their soon-to-be-born son.

Being very spontaneous people, Matthew and Autumn casually married in court only a year after meeting each other as seniors in high school. Their financial struggles have led the two to take residence in a small sailboat with their dog. Unfortunately, pregnancy caused a rise in tension that split the couple apart. With a daughter on the way, Autumn and Matthew must come together to work on their relationship so they can provide for their child and each other.

Although Raymond and Mariah were only together three weeks before Mariah became pregnant, the couple has always been inseparable. The road to childbirth has been very trying, but both have accepted their future roles as parents. Raymond, who was abandoned by his father when he was young, is especially determined to stay and raise his child. Now, living with Mariah’s mom, the two are still trying to get to know each other so they can raise this baby together.

As middle school sweethearts, Ryan and Julia have spent years growing their love for each other and their strong faith. They have always been by each other’s side, quite literally since they share church offices next to each other. Their beliefs were heavily tested, however, after Julia had three miscarriages. Now on her fourth pregnancy with triplets, the two must channel their faith and prepare for what could happen.

Join the conversation on social media by using #OutDaughtered and #Rattled, and make sure to ‘Like’ TLC on Facebook for more updates! Download the TLC GO app to catch up on past episodes of OutDaughtered and Rattled.

What do you think? Have you seen Outdaughtered and/or Rattled? Will you watch the new seasons?

I love Outdaughtered please don’t cancel. They are something to watch, parenting is so good and they treat each child as an individual, with each showing their special personality. It is quite a show with all aspects of them and their children being quite unique very interesting.
Not just another reality show, a real family unt.

I agree. We have been watching them since their birth, I also like to see how they handle everything.

Outdaughtered is such a great show but why not give it some advertising. Get rid of that distgusting Pimple popper!!

so happy out daughter is coming back, the best show on TLC for adults an children please keep them coming.we all love them

I am looking forward to outdaughtered to return..

I do not like outdaughtered. They claim they need money. She has 500 dollar purse goes to the gym regularly has a 50k car and there new home begging for money and lying about not having a nanny. Fake people.