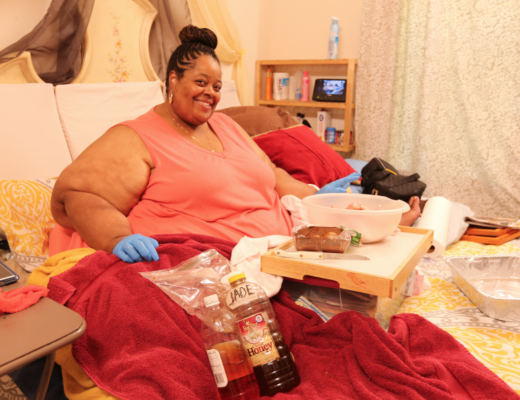 TLC is ready for a new look for the new year. This week, the network announced Family by the Ton and My 600-LB Life will debut new seasons in January.

A docuseries, Family by the Ton “invites viewers back into the office of Dr. Charles Procter Jr, where he guides two separate families in their struggle to overcome obesity and inspire each other to lose weight.” Meanwhile, My 600-LB Life follows “people who are struggling to escape the prison that their own bodies have become.”

(Silver Spring, MD) – MY 600-LB LIFE and FAMILY BY THE TON return to TLC on Wednesdays beginning January 2, where brave individuals invite viewers to share in their life-threatening weight loss journeys and hopes for transformation. The night kicks off at 8/7c with two-hour episodes of MY 600-LB LIFE sharing the excruciating personal stories of individuals who hope to overcome crippling obesity and live a better lives with the help of Dr. Younan Nowzaradan. Then at 10/9c, FAMILY BY THE TON invites viewers back into the office of Dr. Charles Procter Jr, where he guides two separate families in their struggle to overcome obesity and inspire each other to lose weight. In all-new, one-hour episodes, viewers will meet the King family and catch up with the Andersons from last season to find out if each family will find the strength to support each other or become their biggest enablers. Beginning December 21, fans can watch an early premiere of new episodes from My 600-lb Life and Family by the Ton by downloading the TLC GO app or visiting TLC.com/My600lbLife and TLC.com/FamilyByTheTon.

The emotional fan favorite series MY 600-LB LIFE returns to TLC for its seventh season on Wednesday, January 2 at 8/7c, following people who are struggling to escape the prison that their own bodies have become. Viewers will see first-hand their hardships with addiction, dependence and the inevitable impact their condition has on their closest relationships. Each episode will give viewers an inside look at the most extreme emotional and physical journeys to life-saving surgery with Dr. Nowzaradan, and their continued incredible progress thereafter, living the lives they had hoped for.

This season will follow 20 new incredible journeys including a transgender woman who longs to live a glamorous life but struggles to get through every day basics, a couple who met online and are dealing with morbid obesity together and a woman whose family’s lack of proper hygiene – and the fact that they live with 11 dogs – has exacerbated her own health.

FAMILY BY THE TON

The Anderson family is back and continuing their incredible weight loss journey with the guidance of Dr. Procter, but first viewers will meet a new family facing the life and death consequences of morbid obesity and turning to the good doctor for help. Out of the four members of the King family, Casey is the largest, weighing in at over 700-lbs. Casey spends most of his time eating mountains of food in his bedroom while playing video games for hours on end, enabled by his dad who will do anything to keep him happy. Casey’s cousin Ed is a father of two, but his weight of 450-lbs is dangerously life-threatening and must be managed for the sake of his daughters. Meanwhile, cousin Amy might weigh the least in the family at almost 400 pounds, but she sees a future of struggle and limitations that she doesn’t want to accept. And while everyone faces a weight that is life or death, it is far more precarious for Amanda. With a diagnosis of endometrial cancer, Amanda is untreatable as long as she continues to weigh 650-lbs and must lose half her body weight if she ever hopes to have her cancer surgically removed. All four cousins make a pact that they will go on a weight loss journey together and fight the family legacy of obesity threatening their lives.

In the second half of the season, viewers will once again follow the Anderson family and see where Drew, Naomi and Chitoka are after their weight-loss surgeries. Unfortunately, they begin to discover that surgery is not a solution on its own, and that a healthy lifestyle with diet and exercise are crucial. As time passes, the challenge of continuing to lose weight and stay on track grows. Although she sees their progress begin to waiver, their 650-lb cousin Shavonne is now desperate for a change and decides to follow in the family’s footsteps, seeking approval for weight-loss surgery. In time, Shavonne learns that she needs to find motivation within herself and in doing so, will hopefully be able to motivate her cousins to follow through in their weight-loss journey together as a family.

Join the conversation on social media by using #My600lbLife and #FamilyByTheTon, and make sure to ‘Like’ TLC on Facebook for more updates! Download the TLC GO app to catch up on past episodes of My 600-lb Life and Family by the Ton.

MY 600-LB LIFE is produced by Megalomedia for TLC. FAMILY BY THE TON is produced for TLC by Crazy Legs Productions.”

What do you think? Have you seen My 600-LB Life and/or Family by the Ton? Will you watch the new seasons?

please i want to follow the Anderson family and see where Drew, Naomi and Chitoka are after their weight-loss surgeries.