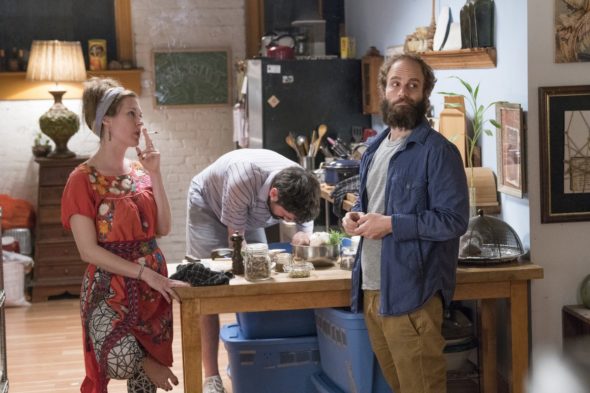 Are you a fan of High Maintenance? HBO just released new details for the TV show’s upcoming third season.

Moving from Friday to Sunday night, HIGH MAINTENANCE(R) returns for its nine-episode third season SUNDAY, JAN. 20 (10:30-11:05 p.m. ET/PT). Created by Katja Blichfeld (who directs the season premiere) and Ben Sinclair, the critically acclaimed show uses The Guy, a marijuana dealer (played by Sinclair), to tell a variety of stories about New York lives, including his own.

This season, HIGH MAINTENANCE profiles everyday people whose stories of success, failure, love and loss intersect across New York, while delving deeper into personal life of The Guy, who is spending less time on his iconic bicycle and more time in “Steve RV,” a set of wheels gifted to him last season. Featuring an intricate web of memorable returning characters and unforgettable new faces, the new episodes find New Yorkers exploring their relationship with the city, touching on such themes as death, parenthood, sexuality, fantasy, aging and more.

While spending time away from the city in his RV, The Guy (Ben Sinclair) gets upsetting news, but makes an intriguing new connection. Cori (Erin Markey), meanwhile, tries to adjust to a new reality without her friend.

After his bike is stolen, regular customer Marty (Gary Richardson) consults The Guy (Ben Sinclair), whose suggestion sends him down a surprising path. Bored with her mundane life, Darby (Catherine Cohen) finds ways to unnerve and bewilder strangers.

Recently named one of the best TV shows of 2018 by Vanity Fair, the New Yorker and Variety, HIGH MAINTENANCE’s second season as hailed by IndieWire as “TV’s most human show” and “a beautiful mural, only growing richer and richer with each new installment.” The New Yorker called it a “humble, graceful and funny anthology that really works,” while Vox described the show as an “empathetic gem” that provides “unexpected and boundless generosity.”

What do you think? Have you seen High Maintenance? Will you watch the new season?