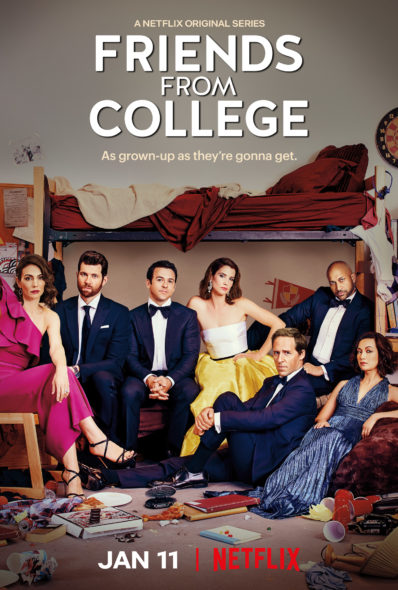 What is going on with you? Netflix has announced the eight-episode second season of its Friends from College TV show will premiere on Friday, January 11, 2019. That’s the global premiere date. Closer to home, Friends from College season two makes its debut tonight, at the Austin Film Festival. Watch the announcement, below.

A Netflix comedy, Friends From College stars Keegan-Michael Key, Cobie Smulders, Annie Parisse, Fred Savage, Nat Faxon, and Jae Suh Park. Guest stars in season two include Sarah Chalke and Billy Eichner. It centers on a group of friends, who bonded at Harvard University, nearly 20 years ago. The series explores how professional and personal growth and upheaval can affect friendships.

Friends From College will hold it’s premiere tonight, October 26 at 7pm, as a part of the Austin Film Festival (more details on attending can be found HERE). Creators Nicholas Stoller & Francesca Delbanco will present a special screening of the second season premiere episode and participate in moderated Q&A afterwards.

Season 2 of Friends From College follows six Harvard alums in their 40s living in New York City and the complicated relationships they have with each other. It’s been a year since Ethan & Sam’s affair was exposed to the 4 other friends – including Lisa, Ethan’s wife – and the friend group is still fractured. No one has heard from Lisa, Ethan has been living a repentant year of writing a YA novel, and Sam has been trying to repair her marriage with her husband Jon.

But with Max’s wedding coming up, the friends won’t be able to avoid each other much longer. Between the engagement party, bachelor party, and wedding, the six will have to overcome the destruction in their past and figure out how to function as a friend group again. Will they be able to move forward or will they regress back to their old destructive patterns once again?

What do you think? Did you watch the first season of the Friends from College TV series? Do you plan to watch season two when it drops to Netflix in January? Let us know, below.

The humor is smart and subtle at times. I haven’t laughed so hard in awhile. My Coworkers binged on all episodes over the 3 day weekend! I hope season 3 will come out soon if renewed by Netflix. Love the twists, perfect casting and storyline.