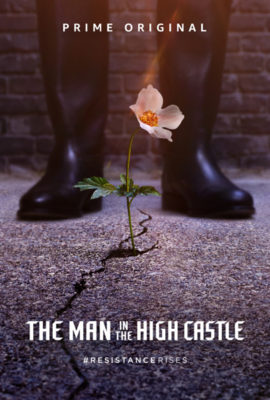 After a nearly two-year hiatus, The Man In the High Castle is finally returning. Season three of the Amazon Prime series is slated to kick off on October 5th. In addition, Amazon has announced (confirmed) that the series has also been renewed for a fourth season. No word on when season four will debut. We can hope for 2019.

Here’s a preview of season three, as well as a recap of the first two seasons of The Man In the High Castle:

The Man In The High Castle – Season 3 Teaser | Prime Video

In the midst of the darkness, the #ResistanceRises on October 5th. #HighCastle

The lines have been drawn but they can move in an instant. Catch up on Seasons 1 & 2 of The Man in the High Castle on Prime Video. #ResistanceRises October 5th. #HighCastle

About The Man In The High Castle:

Based on Philip K. Dick’s award-winning novel, and executive produced by Ridley Scott (Blade Runner), and Frank Spotnitz (The X-Files), The Man in the High Castle explores what it would be like if the Allied Powers had lost WWII, and Japan and Germany ruled the United States. Starring Rufus Sewell (John Adams), Luke Kleintank (Pretty Little Liars), and Alexa Davalos (Mob City).

What do you think? Do you like The Man In the High Castle TV show? Will you be tuning in to see season three in October? Do you think you’ll watch season four?