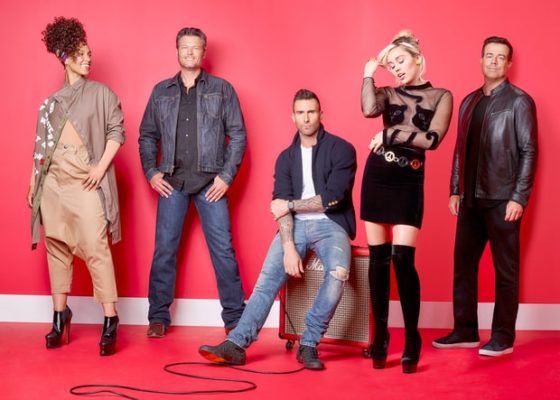 NBC has announced that their very successful singing competition series, The Voice, has been renewed for season 12 (Spring 2017) and season 13 (Fall 2017). In addition, the network has teased which coaches will be returning.

Carson Daly is also returning as host. The 12th season will begin in February 2017.

Current coach Miley Cyrus will return for the 13th season, which begins in fall 2017. The rest of the season 13 coaches lineup will be announced at a later date.

“We can’t wait to experience the unique chemistry and energy Gwen, Alicia, Blake and Adam will bring to season 12,” said Paul Telegdy, President, Alternative and Reality Group, NBC Entertainment. “With Miley returning for season 13, we’re truly ecstatic about the unmatched musical know-how and talent coming together in our coming seasons.”

Miley Cyrus is a singer-songwriter and actress who is currently a coach on the 11th season of “The Voice.” She first joined the series as a key adviser in spring 2016.

Also on NBC, Cyrus has twice hosted and appeared as a musical guest on “Saturday Night Live” and performed on the “SNL” 40th anniversary special in 2015. Elsewhere on television, Cyrus is currently starring in Woody Allen’s Amazon series “Crisis in Six Scenes,” and has hosted the 2015 MTV Video Music Awards.

Cyrus founded the nonprofit organization The Happy Hippie Foundation to rally young people to fight injustice. Since launching, the foundation has provided direct support to thousands of homeless and LGBTQ youth across the country. In 2015, amfAR honored Cyrus’ fight against HIV/AIDS with its Award of Inspiration and the Los Angeles LGBT Center honored her work on behalf of LGBT youth with its Vanguard Award. Most recently Cyrus has been honored with Variety’s 2016 Power of Women award for all her philanthropic efforts.

Alicia Keys, a world renowned artist and activist, is a 15-time Grammy Award winner who has sold 35 million albums and 30 million singles. Keys recently released her new single “Blended Family (What You Do for Love),” featuring A$AP Rocky. Keys’ highly-anticipated sixth studio album, “HERE,” is due out Nov. 4 on RCA Records. To pre-order the album, please click here: http://smarturl.it/iAKHERE

Her top singles include “Fallin,” “No One” and “Empire State of Mind,” with Jay-Z.

As an actress, Keys has appeared in such films as “Smokin’ Aces,” “The Nanny Diaries” and “The Secret Life of Bees,” as well as a role in the second season of the TV series “Empire.” In addition, Keys was a director on one of the stories of the acclaimed 2011 Lifetime anthology series “Five” — exploring the impact of breast cancer on people’s lives — and received a Directors Guild of America nomination for her work.

Frontman for the Grammy Award-winning recording group Maroon 5, Adam Levine has left an indelible mark on popular music. The primary songwriter for the band and a guitar player, Levine’s talents give Maroon 5 its signature sound. His heartfelt ballads and pop anthems have become part of the fabric of today’s pop music scene.

Maroon 5’s album “V” debuted at #1 on Billboard’s Top 200 and features the hit singles “Maps,” “Animals” and “Sugar,” all of which hit #1 on the Top 40. The music video for the chart-topping “Sugar” has logged over 1 billion views to date. Maroon 5 is currently on the final leg of their world tour in North America and their new single, “Don’t Wanna Know,” is out now.

In addition to his work with Maroon 5, Levine co-starred in the Weinstein Co. film “Begin Again.” The track from the movie, “Lost Stars,” performed by Levine and released by his label 222, received an Oscar nomination for Best Original Song. Most recently, he has signed on to appear in the movie “The Clapper,” alongside Ed Helms and Amanda Seyfried, and “Fun Mom Dinner,” co-starring Molly Shannon and Toni Collette.

Blake Shelton has earned the incredible accomplishment of being the coach for four champions over the show’s 10 completed seasons. Season-seven winner Craig Wayne Boyd followed in the footsteps of past victors Danielle Bradbery, Cassadee Pope and Jermaine Paul.

Shelton’s credentials as a singer are impressive and were well-established long before “The Voice” came into his life. He’s a five-time winner of male vocalist of the year at the CMA Awards, and has earned a host of other awards and nominations, including the ACMs and Grammys.

Shelton’s new single, “Guy With a Girl” is the third single from his new album, “If I’m Honest,” which debuted at #1 on the Billboard Album Sales and Country Albums Charts. The 15-track album contains several songs written by Shelton, including “Friends,” the feature song in the box office smash “Angry Birds: The Movie.” Shelton also penned the gospel-hymn tinged “Savior’s Shadow” and “Go Ahead and Break My Heart,” a duet he co-wrote and performs with Gwen Stefani.

Stefani will be returning to “The Voice” family. She was previously a coach in seasons seven and nine and was an adviser for seasons eight and 10.

A three-time Grammy Award winner, Stefani has achieved worldwide success as a performer, songwriter, and recording artist who has sold more than 30 million albums worldwide with No Doubt and as a multi-platinum solo artist. Earlier this year Stefani released her critically praised third solo album “This Is What the Truth Feels Like” which debuted at #1 on the Billboard Top 200 and featured the gold certified first single “Used to Love You.” ”This Is What the Truth Feels Like” follows her other successful solo albums — “Love.Angel.Music.Baby” and “The Sweet Escape” — which featured the hit singles “Rich Girl,” ”Sweet Escape,” “What Are You Waiting For?” and the Pharrell Williams-produced #1 hit “Hollaback Girl.”

Fashion and music are not her only creative outlets, as Stefani just launched her first children’s animated television series, “Kuu Kuu Harajuku,” on Nickelodeon. Co-created and executive produced by Stefani, the show follows the adventures of the all-girl band HJ5 — Love, Angel, Music, Baby and G — through their super cute fantasy world of music, fashion and style. Stefani wanted to create an animated series for young girls that celebrates creativity, imagination and individuality.

So far this fall, “The Voice” has averaged a 4.2 rating in adults 18-49 and 14.7 million viewers overall in “most current” results from Nielsen Media Research for the opening two weeks of the season. ”The Voice” continues to rank as television’s #1 alternative series in adults 18-49, a status it’s maintained over the prior four seasons. “The Voice” this fall is tracking ahead of the previous cycle, including “live plus same day” gains of +3% in adult 18-49 rating and +21% among millennial viewers (2.3 vs. 1.9 in adults 18-34, L+SD).

“The Voice” is a presentation of MGM Television, Talpa Media USA Inc. and Warner Horizon Television. The series was created by John de Mol, who serves as executive producer along with Mark Burnett, Audrey Morrissey, Jay Bienstock, Lee Metzger and Chad Hines.

What do you think? Do you like The Voice TV show? Do you think that it should continue to air two cycles a season?

Blake and Adam are the best
I like watching them two..
The two Beautiful Ladies Alicia Keys and Gwen were perfect together as coaches
I always look forward to the voice,hopefully it doesn’t cancel.

I will NOT be watching the next season. Your ruining the show.