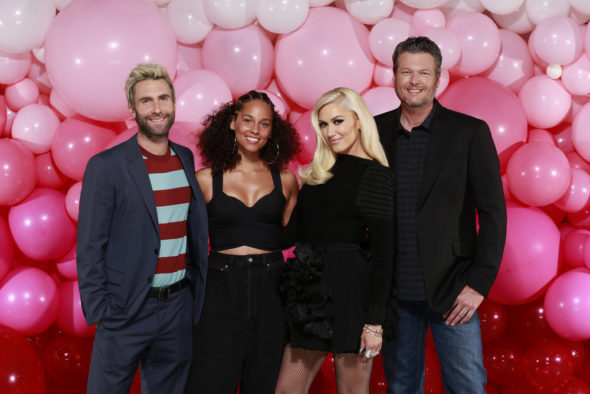 Alicia Keys is coming back. Today, NBC announced the Grammy-winning musician will return for season 14 of The Voice.

Season 14 of The Voice is slated to premiere on NBC in spring 2018.

Keys will be joined by Adam Levine, Blake Shelton and Kelly Clarkson, who will be making her coaching debut on “The Voice.” This will mark Keys’ third time as a coach and she triumphantly returns as a champion. Her artist Chris Blue was named “The Voice” when she last coached in season 12.

“We are thrilled to welcome back Alicia’s positive energy, competitive spirit and sheer talent. She brings unparalleled expertise and has proven she knows how to help artists win,” said Paul Telegdy, President, Alternative and Reality Group, NBC Entertainment. “The chemistry between Alicia, Kelly, Adam and Blake will make for a wildly unpredictable and compelling season 14!”

Here is a video announcement with the four coaches revealing Keys’ return to “The Voice”: https://youtu.be/6cnobaJFY-M

In addition to capturing 15 Grammys for her musical talents, Keys is also an actress, New York Times best-selling author, entrepreneur and activist and powerful force in the global fight against HIV and AIDS.

Since the 2001 release of her debut album, “Songs in A Minor,” Keys has built an unparalleled repertoire of hits and accomplishments with more than 35 million albums and 30 million singles sold worldwide. She won five Grammys in 2001 for “Songs in A Minor,” and her second studio album, “The Diary of Alicia Keys,” garnered her four Grammys in 2004. Later that year, she released her first live album, “Unplugged,” which debuted at No. 1.

Her third studio album, “As I Am,” also opened at No. 1 on the Billboard 200, with the album’s lead single, “No One,” topping the Billboard Hot 100 for five consecutive weeks. In late 2009, Keys released her fourth studio album, “The Element of Freedom,” which hit the platinum sales mark in one month and spawned the No. 1 single “Unthinkable” and “Empire State of Mind (Part 2),” which also topped the Billboard charts.

In 2012, Keys released her Grammy-winning fifth studio album, “Girl on Fire,” which debuted atop numerous Billboard album charts. In addition to being the best-selling R&B album in the U.S, “Girl on Fire” reached No. 1 on the iTunes album chart in 19 countries.

In 2014, Keys collaborated with Kendrick Lamar, Pharrell Williams and Hans Zimmer on the song “It’s On Again,” which was featured in the blockbuster film “The Amazing Spider-Man 2.”

Last year Keys released her powerful and critically acclaimed sixth studio album, “Here,” on RCA Records, which was a chart-topper including No. 1 on the R&B/Hip-Hop Albums. On “Here,” Keys offers an honest glimpse into what matters most to her and the artist shines a light on the sonic soulfulness and stories from New York, the city that raised her. As an accompanying visual story to “Here,” Keys also released a short-film titled “The Gospel,” inspired by the genesis of her songs.

So far this fall, “The Voice” is averaging a 3.3 rating with its Monday and Tuesday telecasts in the key adult 18-49 demographic and 13.2 million viewers overall, according to “live plus seven day” ratings from Nielsen Media Research, making it the #1 alternative series of the season in both measures. For the most recently completed week, the two editions of “The Voice” tied as the #3 entertainment show of the week in adults 18-49 “live plus same day” ratings, behind only “This Is Us” and “The Big Bang Theory.”

What do you think? Do you watch The Voice? Are you glad Alicia Keys is coming back?

Glad to see Alicia is returning. Don’t care for Jennifer Hudson – too over dramatic for me.