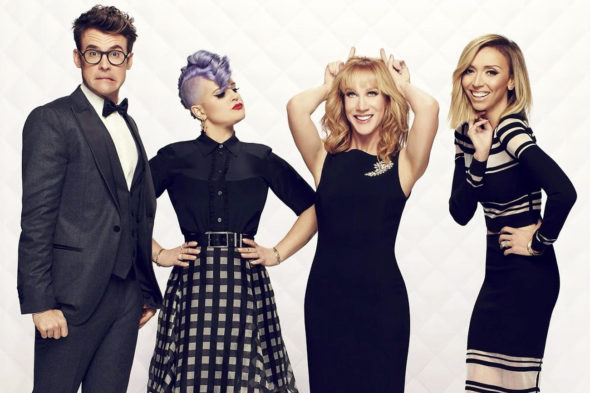 The series finale of Fashion Police debuts on E! on November 27th at 8 p.m. ET/PT.

Los Angeles, CA – Wednesday, October 18, 2017 – After more than two decades of countless laughs and unforgettable moments, E!’s iconic comedy franchise, produced by Wilshire Studios, will sign off to “Joan Rangers” one last time when “Fashion Police: The Farewell” series finale special airs Monday, November 27th at 8:00p ET/PT. Helmed by the legendary comedian and series co-creator Joan Rivers since its inception in 1995, “Fashion Police” forever changed the pop culture conversation – covering every major award show and fashion event through the lens of its signature opinionated, relatable and self-deprecating comedic commentary. Following Joan’s passing in 2014, the franchise continued with the blessing of her daughter and executive producer on the show since launch, Melissa Rivers, who became a co-host in 2015. The current panel also includes Giuliana Rancic, Brad Goreski, NeNe Leakes, and Margaret Cho. Over the past 20 years, the show has welcomed some of the most notable celebrities from the worlds of fashion, entertainment and sports, ranging from Gigi Hadid and Nicki Minaj to Laila Ali and Martha Stewart, who have joined the “Fashion Police” to share some laughs and discuss their favorite fashion hits and misses.

“‘Fashion Police’ has been a red carpet mainstay for over two decades that has been emulated across the entertainment landscape,” said Adam Stotsky, President, E! “Joan’s beloved no-holds-barred style fueled the franchise’s clever approach to fashion and comedy, and we are incredibly proud of its long-running success. We are also especially grateful to Melissa, as well as Giuliana, Brad, Nene, Margaret and the entire ‘Fashion Police’ team, who have continued to deliver the laughs and make this iconic franchise truly one of a kind.”

“Thank you to E! for having the vision to see the potential of ‘Fashion Police’ which changed both the entertainment and fashion industries,” said Melissa Rivers. “I am truly proud to be part of this legacy.”

Hosted by executive producer Melissa Rivers, and co-hosts Giuliana Rancic, Brad Goreski, NeNe Leakes, and Margaret Cho, the network will commemorate the franchise with “Fashion Police: The Farewell,” a look back at the show’s most memorable moments from many famous faces who have stopped by the set and the outrageous fashion debates that ensued. Viewers can also expect some of the funniest, most jaw-dropping jokes and fan favorite segments such as “Bitch Stole My Look,” “Guess Me From Behind,” and “Starlet or Streetwalker,” and a slew of surprise celebrity guests will join in the celebration of the comedy series that revolutionized the fashion world. The special will take viewers behind the scenes with insider scoop from the cast and crew and reveal never-before-seen footage from the groundbreaking series – including an unaired 80’s themed episode with Joan and the gang.

As the global, multi-platform destination for all things pop culture, E! will continue to deliver an unparalleled red carpet experience and the first analysis of all the fashion with its signature fun, opinionated and hilarious style and pop culture commentary for the 2018 red carpet season, including “Live from the Red Carpet” and across the brand’s comprehensive digital and social platforms. In addition, “E! News Look Book” returns to review the style evolution of today’s hottest names in pop culture and fashion, and to count down the red carpet looks of some of Hollywood’s most famous faces.

What do you think? Are you a fan of Fashion Police? What are some of your favorite moments from the show?