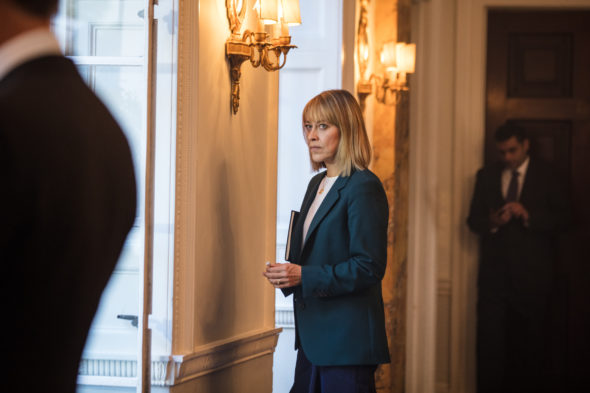 Has SundanceTV decided to hold onto what it has, or will it let go and start anew? Is The Split TV show cancelled or renewed for a second season on SundanceTV? The television vulture is watching all the latest cancellation and renewal news, so this page is the place to track the status of The Split, season two. Bookmark it, or subscribe for the latest updates. Remember, the television vulture is watching your shows. Are you?

A BBC One and SundanceTV co-production, The Split stars Nicola Walker, Annabel Scholey, Deborah Findlay, Anthony Head, Rudi Dharmalingam, Stephen Mangan, Meera Syal, Fiona Button, Barry Atsma, and Stephen Tompkinson. Unfolding in London, the drama centers on the Defoe women, whose firm is at the center of the city’s divorce circuit. Now that top attorney Hannah (Walker) has left for rival Noble & Hale, she will have to face off against her own family. Meanwhile, family patriarch Oscar (Head) is back after a 30-year absence, which throws everything further off kilter.

The first season of The Split is averaging a 0.01 rating in the 18-49 demographic and 69,000 viewers. Learn how The Split stacks up against other SundanceTV TV shows.

Although it premiered with very low numbers, it is still too soon to use the ratings to determine whether SundanceTV will cancel or renew The Split for season two. Because it is a co-production with BBC, its reception across the pond figures into that equation. For now, I’ll keep an eye on the Nielsens and update this page with any developments. Subscribe for free cancellation and renewal alerts on The Split.

5/30/2018 Status Update: The Split has been renewed for season two on BBC One and SundanceTV. Details here.

What do you think? Should SundanceTV renew The Split TV show for season two? How would you feel if they cancelled this TV series, instead?

What a waste of time! REALLY? This is up there with Dexter and Lost. Such brilliant actors. All of them. Horrid, Hortid ending!!!!!!

Yes. Do renew The Split. Very engaging, smart, terrific drama. So great to be able to get smart TV programming here in the States from outside the States. Loved Nicola Walker in Last Tango in Halifax (missing it) and certainly enjoy her role in The Split. Yes. Get going on renewing The Split.

Love the series and hope it can continue.

This is one of my favorite shows. Very intelligent with great cast. I hope it is renewed. It isn’t getting the attention it should have as good TV.

An interesting and rather sophisticated tv show. Compelling characters. Strong female leads. No violence gratuitous sex or vulgarity. Of course it is not popular with the ignorant masses. But I am somewhat obsessed with this show. I hope there are more out there who discover The Split. Happy to see at least a season two in the works! Sundance email helped me discover the show.

I live in the UK.It was said after the show there will be a 2nd series.