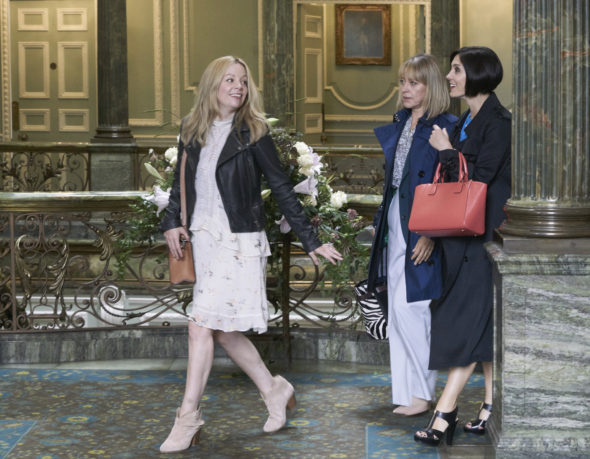 TV show description:
From creator and writer Abi Morgan, The Split TV show unfolds in London. The drama follows Ruth Defoe (Findlay) and her three daughters. The Defoe women are at the center of the city’s divorce circuit. When top attorney Hannah (Walker) leaves Defoes for rival firm Noble & Hale, she’ll have to start facing off against her own family.

The Defoes specialize in high-profile cases, like the split between sportswear titan Davey McKenzie (Tompkinson) and his wife, Goldie (Syal). In that case, the former couple is sparring for control of the family empire. Meanwhile, comedian Rex Pope (Baynton), is embroiled in a nasty custody battle with his ex (and former agent).

Patriarch Oscar Defoe (Head) has been out of the picture for three decades. Now that he is back on the scene, everything feels more chaotic for Hannah, Nina (Scholey), and their youngest sister, Rose (Button).

Meanwhile, now that she is at Noble & Hale, Hannah must also contend with Christie Carmichael (Atsma), an old love. Between striking out on her own, as well as dealing with the reappearance of both her father and her ex, Hannah finds she must face the past, even those parts she thought she had escaped.

What do you think? Do you like The Split TV series? Should this TV series be ending or should it have been renewed for a fourth season on SundanceTV and BBC One?

Enjoy the show a lot. Would love for it to continue.

Please show all seasons in USA and continue the series