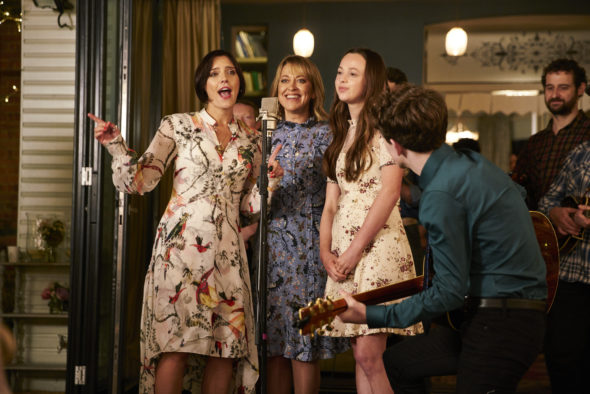 Is the first season of The Split TV show solid enough to make you stick with the SundanceTV series? As we all know, the Nielsen ratings typically play a big role in determining whether a TV show like The Split is cancelled or renewed for season two. Unfortunately, most of us do not live in Nielsen households. Because many viewers feel frustration when their viewing habits and opinions aren’t considered, we’d like to offer you the chance to rate all of The Split season one episodes here.

A BBC One and SundanceTV co-production, The Split stars Nicola Walker, Annabel Scholey, Deborah Findlay, Anthony Head, Rudi Dharmalingam, Stephen Mangan, Meera Syal, Fiona Button, Barry Atsma, and Stephen Tompkinson. Unfolding in London, the drama centers on the Defoe women, whose firm is at the center of the city’s divorce circuit. Now that top attorney Hannah (Walker) has left for rival Noble & Hale, she will have to face off against her own family. Meanwhile, family patriarch Oscar (Head) is back after a 30-year absence, which throws everything further off kilter. **Status update below.

What do you think? Which season one episodes of The Split TV series do you rate as wonderful, terrible, or somewhere between? Should SundanceTV cancel or renew The Split for a second season? Don’t forget to vote, and share your thoughts, below.

**5/30/2018 Status Update: The Split has been renewed for season two on BBC One. Details here. Will SundanceTV pick up the second season? Stay tuned.