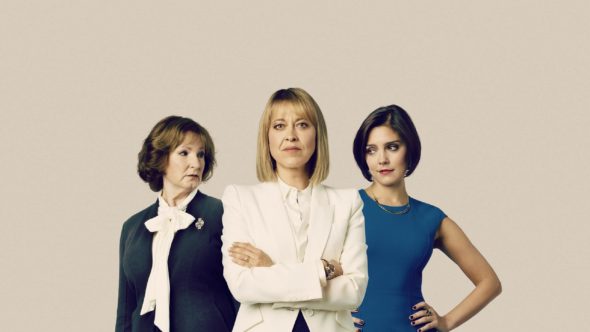 The Split is getting ready for a new season on Sundance TV. Season two of the drama will premiere in May on the cable network. Viewers will see more of the lives of the Defoe sisters.

SundanceTV revealed more about the return of the series in a press release. Check that out below.

At the end of the first season, Hannah’s formerly rock-solid marriage was beginning to crack following the devastating revelation of Nathan’s (Stephen Mangan) affair. For the rest of the family, and Hannah, joy had turned to tragedy as estranged father Oscar (Anthony Head) passed away the night of Rose and James’ (Rudi Dharmalingam, Our Girl) wedding. Struggling with the grief of losing her father for the second time in her life and with Christie (Barry Atsma) having made his feelings for her clear, Hannah was torn between her past and the promise of a different future.

Now the Defoes are back, at newly merged law firm Noble Hale Defoe, and as former rivals now find themselves on the same side of the table, Hannah’s latest case is set to put NHD firmly on the map. Meanwhile, Rose and James return from their honeymoon with ambitions to start their own family and Nina teeters on the edge, as the consequences of her erratic behavior finally catch up with her. Ruth, now forced out from her role as head of the family firm, must search for a new purpose in her life.

Created and written by Abi Morgan, The Split is produced by Sister Pictures for BBC One, co-produced with SundanceTV, and was re-commissioned by Piers Wenger, Controller of BBC Drama, and Charlotte Moore, Director of BBC Content.”

A really fine show. Nicola Walker is one of my favorite actresses. Am anxious for its return this month.

Loved Season One and looking forward to Season Two. A bright light in the midst of Covid 19. May can’t come soon enough.

I’ve been waiting for this great series to return.

So excited The Split is coming back on!!!! I couldnt wait from week to week to watch it. Love this show. Thank u for renewing this series…..

Been waiting for almost 2 years for this wonderful show to return. I have Dish service. How do I get Sundance??? And quickly!!!

Loved the first series, looking forward to second on Sundance.

A show that went under the radar for many and is very good.

Been waiting for this to come back. Love this show!

This is my VERY FAVORITE show – ever!! I bought Series 1 and watch it over and over. I can’t wait for Season 2 – and hope there will be MANY more seasons of The Split.