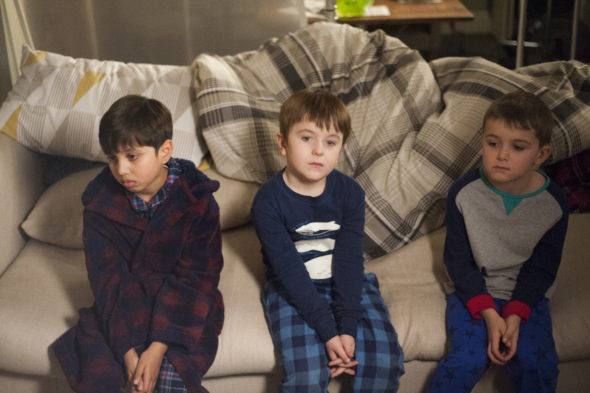 TV show description:
Based on the Israeli series, Yellow Peppers, The A Word TV show centers on the Hughes family. When he is five years old, their dreamy, quirky little boy, Joe (Vento), is diagnosed with Autism Spectrum Disorder.

Although his parents, Alison (Christie) and Paul (Ingleby) realized Joe lived in his own, well-ordered world, they only let themselves think of him as eccentric and anti-social. When Alison’s brother, Eddie Scott (McHugh) and his wife, Nicola (Robinson), return home to work out their marital problems, they can’t help but say what others have not. It is then that Alison and Eddie’s father, Maurice (Eccleston), comes cleans with his own reservations about Joe.

The extended Hughes and Scott family has never been particularly adept at expressing their emotions. It is not that they don’t care. They just find it difficult. In the wake of Joe’s official diagnosis, feelings bubble to the surface which only serve to highlight the tensions between them. Now, it is time for them to learn how to communicate.

Joe loves music and has always used his knowledge to help him seem more social, while using it as a buffer between himself and the world. Although he’s a sweet, funny little guy, he has trouble processing both language and emotions and is no fan of change, even when it is to his benefit.

His father, Paul, has lived his entire life in the Lake District. He in the process of launching a new gastropub when his son is diagnosed. Although it seems he is coping well with everything, Paul really just wants to go out and fix the whole world to accommodate his boy.

Joe’s mother, Alison, is also a lifelong local. Apart from having her daughter, Rebecca (Wright), too young and her brief marriage to the girl’s father, Alison’s life has gone pretty much according to plan — until now. She knows she is Maurice’s favorite and has always emulated his best qualities. Although Alison prefers to be in charge, now she knows she has to admit she can’t control everything for the sake of her son. Her husband Paul, however, feels otherwise.

Rebecca, meanwhile, has enough on her mind, between her boyfriend and just life as a teen. Although she has always been more than willing to accept her little brother for whom he is, she can’t get anyone at home to listen to her. Frequently, she seeks solace at her Uncle Eddie’s house, and confides in him and Nicola, about everything going on in her life.

Eddie has had a hard time, lately. His business failed, so now he’s back home to reluctantly work for his father, while he tries to rebuild his relationship with Nicola. A General Practitioner in training, Nicola has returned to work as a nurse in the local doctor’s office, as she and Eddie try to heal from her adultery.

Will the Hughes and Scott families learn how to muddle through, even though life has thrown them this curveball? In addition to learning how to accept Joe’s Autism and give him what he needs, can they learn to connect with one another? Stay tuned.

What do you think? Do you like The A Word TV series? Should this TV show be cancelled or renewed for another season on SundanceTV?

Just discovered it in Lockdown-watched all 3 series and thoroughly enjoyed it, great show.

Please bring back the A Word. It is a wonderful show!

Love love the show. Hope they bring it back

Just heard of this show on here today. Would be great if it was on Hulu or something similar.

I just finished watching the series The A word. I would love to see a season 3. As a family with an Autistic child ourselves, it is “spot on” with the struggles.

Love the A word. Great show. Hope it is being renewed. Also with it would be rerun for those who never heard of it. I met someone who works with autistic children and it had stopped running at that time and wasn’t available on demand.

Gosh. I look forward to this excellent show. I love the setting , the characters and the storyline. What tv should be. Escape from real life and a group of people I can care about without the worry.

I love this show and will be very disappointed if it does not return.

Love the show, I wish it would come back for a third season.

When is this show coming back-I LOVE this show!

This show is great, is very real in the way they portray everything. I think the show should definitely be renewed. Joe is great and should be in more tv shows. Love, Love, Love the show. Please renew