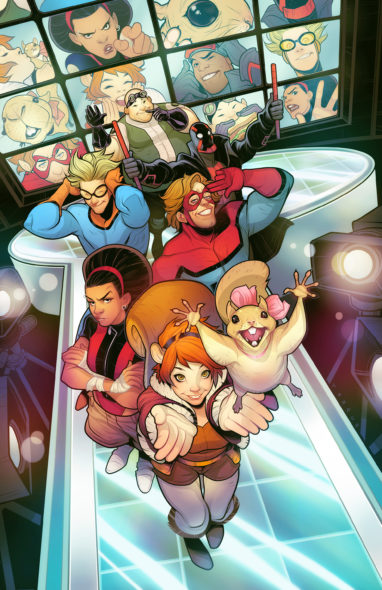 It seems Squirrel Girl is out of her tree, at least temporarily. Although they picked up the 10-episode first season of Marvel’s New Warriors TV show back in April of 2017, Freeform has now cancelled its order for the half-hour live-action superhero comedy. THR reports that since Freeform has declined to move forward with New Warriors, Marvel is shopping the series to other outlets in preparation for a 2018 release.

Marvel’s New Warriors centers on “…six young people learning to cope with their abilities in a world where bad guys can be as terrifying as bad dates.” The last we heard, the cast includes Milana Vayntrub as Doreen Green a.k.a Squirrel Girl; Derek Theler as Craig Hollis a.k.a Mister Immortal; Jeremy Tardy as Dwayne Taylor a.k.a Night Thrasher; Calum Worthy as Robbie Baldwin a.k.a Speedball; Matthew Moy as Zack Smith a.k.a. Microbe; and Kate Comer as Deborah Fields a.k.a. Debrii.

Sources say there has been some talk that the 10-episode series from Kevin Biegel (Enlisted) could be taken to Disney’s forthcoming subscription streaming service, though insiders stress that’s a long shot.

The pilot — which stars Baby Daddy grad Derek Theler as Mister Immortal and This Is Us‘ Milana Vayntrub as fan-favorite Squirrel Girl — is said to have tested through the roof and caught the attention of high-level Disney executives. Insiders note that Freeform — which is expanding original programming to four nights a week in 2018 — could not find a slot for the show next year as it had originally intended. Marvel then asked for New Warriors back as the comic book powerhouse wants it to premiere in the new year. Freeform obliged.

“We are extremely excited about Marvel’s New Warriors and look forward to finding the perfect partner to launch the series with in 2018,” said Dan Buckley, president of Marvel Entertainment.

Sources suggest Disney-owned Marvel — which has a multiple-show deal at Netflix that includes Daredevil, Jessica Jones, Iron Fist, Luke Cage, The Defenders and the upcoming Punisher — is no longer able to sell to outside companies. (Marvel denies that.) If true, that would seemingly limit the potential new homes for New Warriors. That would indicate that New Warriors could wind up on Disney’s SVOD service that will be home to the studio’s hits like Finding Dory, Marvel features like Captain America and Lucasfilm titles including Star Wars. Disney’s streaming service is being eyed to launch in late 2019, which could also eliminate that as a destination unless the platform is jump-started early as Marvel is keen on the show airing in 2018. Sources say New Warriors could also be taken out to other streaming services, with the comic book giant eyeing a two-season pickup. Production is rumored to resume in January should the show find a quick new home.

What do you think? Were you looking forward to Marvel’s New Warriors TV series? Where do you think this new TV show belongs?

Too many marvel superhero shows!!